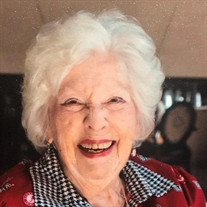 Ann Marie Bryant, the only child of the late Lawrence McNamee and Lena Cecelia McNamee, passed away peacefully at her daughter’s home on December 4, 2019, at the age of 94. She is preceded in death by her husband of 51 years, William (Bill) Maxwell Bryant and her daughter, Cathy (Darral) McAlpin. Ann was born in Minneapolis, Minnesota, on September 16, 1925. She met and married Bill Bryant during WWII while he was in the Navy stationed in Minneapolis. The couple had three children, and the family eventually moved from Minnesota to Birmingham, Alabama to be close to family where they resided for the next 61 years. Ann retired from Sears and Roebuck as a Supervisor of the Credit Department for 32 years. Upon retirement, she volunteered at St. Vincents East Hospital for 20 yrs. She was also a member of the Loyalty Class of Huffman United Methodist Church. As an avid sports enthusiast, she played golf, and cheered passionately for the University of Alabama’s football team. She loved animals, especially dogs, and always had one since a little girl and made it a point to always love on them. Her family will always be so appreciative for the compassion shown by Ms. Janet Richardson of Tresaith Kennels, the home of Pembroke Welsh Corgis. Her support through her therapy dogs, Dewy and Shani, over the past five years have provided love and compassion and a sense of well-being on many occasions through sickness and health. Ann is survived by her two daughters, Christie (Milton) Ballard and Caren (Rob) Stone; her grandchildren, Col. Patrick (Stephanie) Ballard, Erin (Scott) Mardis, Joshua Stone, Sarah Stone, Ruth (David) Shafer, Catherine (MSgt. Guy) Sotomayor, Lindsey (Jason) Blumenthal, Bryan McAlpin; and 10 great-grandchildren. Services will be held at McCalla Memorial Funeral Home Saturday, December 7th, at 1:00pm with visitation from 12:00pm until 1 PM.

Ann Marie Bryant, the only child of the late Lawrence McNamee and Lena Cecelia McNamee, passed away peacefully at her daughter&#8217;s home on December 4, 2019, at the age of 94. She is preceded in death by her husband of 51 years, William (Bill)... View Obituary & Service Information

The family of Ann Marie Bryant created this Life Tributes page to make it easy to share your memories.

Ann Marie Bryant, the only child of the late Lawrence McNamee...

Send flowers to the Bryant family.