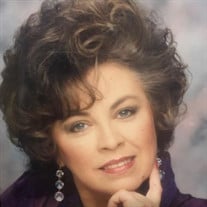 Bonnie Wilson Cook, age 75, of Helena Alabama, passed away on August 19th, 2020 at UAB West Medical Center. Bonnie was born in New Orleans, Louisiana to the late Albert K. Wilson, and Sara C. Wilson on August 14th, 1945. Bonnie graduated from Greenville High School in 1962. She then attended Mississippi College for Women in Columbus, MS. During her early years she worked at a local radio station in a mall in Biloxi Miss. Later while working there she met her future husband, Alan Cook. This union was blessed with a wonderful and loving son Jamie Cook. After marrying, together they moved to Marietta, Georgia, and opened up a carpet store. Bonnie could accomplish anything she set her mind to. After that, she began to raise and show Alaskan Malamutes. This is when she discovered her love for dogs. She discovered this was her passion. Later, they moved to Huntsville, AL, where she began working as an office manager for a big construction company. She decided to start breeding Yorkshire Terrier dogs in her spare time. She would go on to show and sell them across the country. During this time Bonnie would also make and sell jewelry in her spare time as well. She and Alan traveled to many craft shows around the country selling their jewelry on the weekends. Bonnie always had a great sense of humor and loved making people laugh. Bonnie had several places she resided in throughout her life, Biloxi, Mississippi, Mobile, Alabama, Marietta, Georgia and Huntsville, Alabama. For the past fifteen years she has resided in Helena, Alabama, with her son Jamie W. Cook and Cristy J. Shivers who had taken care of her and all of her needs. Bonnie Wilson Cook is survived by a son, Jamie W. Cook and grandson, Ashton A. Cook. She has two sisters, Kimberly Fleming who resides in Birmingham, Alabama and Sherri Whitfield who resides in Brandon, Mississippi. She is preceded in death by her husband, Alan Cook, who passed June 26th, 1993. Visitation will be on Monday, August 24, 2020, at McCalla Memorial Funeral Home in McCalla Alabama, starting at 10:00 to 11:00 with funeral service at 11:00. Following the funeral service, the burial will be at Valhalla Memory Gardens, in Huntsville, Alabama.

The family of Bonnie Jean Wilson Cook created this Life Tributes page to make it easy to share your memories.

Bonnie Wilson Cook, age 75, of Helena Alabama, passed away on...

Send flowers to the Cook family.