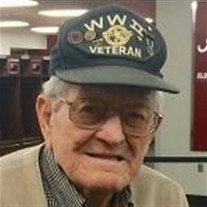 Daniel H. (Harmon) Frederick Sr., age 93, of West Blocton, Al. died at home on May 3, 2018. Funeral services will be held at McCalla Memorial Funeral Home. Visitation will be at 9:30 a.m. with the funeral service at 11a.m on Monday, May 7, 2018. A private family burial will be held at the Alabama National Cemetery, Montevallo, AL. As a junior in high school, he was drafted into WWII where he became part of the U.S. Army 21st Infantry Division. On the island of Goodenough (New Guinea), he was trained as a combat medic. As a nineteen year old, he made beach landings on the islands of Hollandia (New Guinea), Leyte and Mindora (Philippines). As a twenty year old, he made an early morning beach landing at Lubang (Philippines), where he was wounded and later received his first Purple Heart. While still twenty years old, he received his second Purple Heart for a second combat injury on the island of Mindanao. Before he left the island of Mindanao, he and six combat buddies were captured by the Japanese and held as prisoners of war for seventeen days. In addition to his two Purple Hearts, he received two Bronze Stars, the Philippine Liberation Medal, the WWII Victory Medal, and the applause of a thankful nation for being a part of The Greatest Generation. The 21st Infantry Division was also awarded the Presidential Unit Citation for its actions on Leyte island. More important than any medal given out in this life, in 1998 he professed Jesus Christ as his Lord and his Savior. He was predeceased by his wife, Irene M. Frederick, his parents Rev. and Mrs. G.C Frederick, three brothers and two sisters. He is survived by his daughter, Vicki F. Collins (Bill) of Douglasville, Ga., sons Danny H. Frederick, Jr. (Jackie) and R. Mark Frederick (Kimberly) both of McCalla, Al. He is also survived by eight grandchildren and thirteen great-grandchildren. In lieu of flowers, the family requests that memorial donations be made to the Support Committee of the Alabama National Cemetery (SCALNC), for their upcoming Scenic Overlook Pavilion, at P.O. Box 648 Montevallo, Al. 35115.

The family of Daniel Harmon Frederick Sr. created this Life Tributes page to make it easy to share your memories.

Send flowers to the Frederick family.