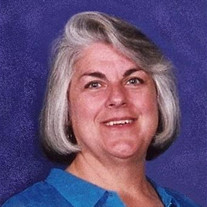 Debra Marchant Paul Born April 10th 1954, Died October 13th 2019 Debra Marchant Paul, 65, died peacefully at her home on October 13th after a three year battle with ovarian cancer. The daughter of Henry Clayton and Bannie Viola Marchant, Debra was the youngest of six children. She was preceded in death by her parents and one brother, Rondie Patton Marchant. Debra is survived by her husband, Michael and two daughters, Sethanna Paul Ackerman (wife of Trent Ackerman) of Woodstock, AL and Melissa Paul Poole, (wife of Michael Poole) of Lakeview, AL. She had three grandchildren, Castine Elizabeth Boothe, Daxton Michael Poole also of Lakeview and John Bernard Ackerman of Woodstock. Debra is also survived by a Sister; Peggy James of Vance, AL and three brothers; Charles Marchant (wife Jean) of West Blocton; Howard Marchant (wife Janis) of West Blocton and Terry Marchant of West Blocton. She had numerous nieces and nephews. She was a happy person who enjoyed peoples company and they enjoyed hers. Her infectious laughter earned her the nickname of “Giggles” in her earlier years. She was loved by so many. Even though Debra lived her entire life in the small rural community of Cedar Grove, not far from West Blocton, she loved to travel. She enjoyed numerous cruises, cross country road and bus trips, and mission trips which took her to the Philippines and Ukraine. Her “Happy Place” was a peaceful little cove on the coast of Maine. But if Debra was here today, she would tell you the thing she enjoyed most was serving her Lord and Savior Jesus Christ. Services will be held on Saturday, October 19th 2019 at Ada Chapel Bible Methodist Church, (12540 N. Scottsville Rd., West Blocton, AL 35184.) Visitation will be from 11:00 AM until 1:00 PM with the service starting at 1:00 PM. Internment in the Ada Chapel Cemetery will follow. In lieu of flowers please make donations in Debra's honor to THE NORMA LIVINGSTON OVARIAN CANCER FOUNDATION: P.O. Box 43826, Birmingham, AL 35243.

The family of Debra M. Paul created this Life Tributes page to make it easy to share your memories.

Send flowers to the Paul family.