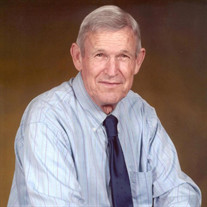 WINSLETT, DONALD REUBEN, age 86, of McCalla, Alabama, answered, on the evening of May 2, 2021, God&#8217;s beckoned call to come and dwell in His house of many mansions. Donald was preceded in death by: His parents: Oscar Eugene Winslett Mittie... View Obituary & Service Information

The family of Donald R. Winslett created this Life Tributes page to make it easy to share your memories.

Send flowers to the Winslett family.