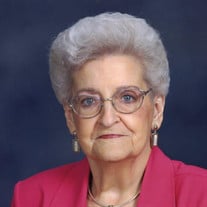 Dorothy “Dot” Lambert died on March 7, 2021 after a long struggle with heart failure. Her passing was peaceful in the home she shared with her daughter and son-in-law, most recently in North Carolina, the state of her birth. Born in 1931 to A.C. and Lelia McConnell in Kannapolis, NC, Dot spent most of her life in Alabama, which she always considered home. Known as fun-loving and hospitable with a joyful, infectious laugh, Dot enjoyed sewing, gardening, fishing, camping, playing the piano, and cooking for a crowd of family and friends. With a deep commitment to her faith and her local church, Dot participated in the Women’s Missionary Union and prayed faithfully for missionaries around the world. Dot is survived by her daughter Linda Hilburn and her husband Carl Hilburn, her daughter-in-law Gail Scott, her stepson, Terry Lambert, four grandchildren (Michelle Kirtley, Darlene Mauldin and Matthew Scott and Jason Scott), two step-grandchildren (Chase Glass and Sarah Lambert) and seven great-grandchildren (Ethan Kirtley, Philip Kirtley, Isaiah Kirtley, Ruth Kirtley, Sophia Mauldin, Samuel Mauldin, and Lydia Mauldin). She is also survived by her brother A.C. McConnell, Jr., his three sons, Guy, Kerry, and Greg and their families as well as many nieces and nephews who were very special to her. She is preceded in death by her parents, her husband J.D. Scott, her second husband Lidge Lambert, her son Wesley Scott, her stepson, Steve Lambert and stepdaughter, Deborah McQuade. Dot’s funeral will be Monday, March 15 at McCalla Memorial Funeral Home, 4780 Letson Farm Parkway, McCalla, Alabama 35111 at 1:00 pm with visitation from 12:00-1:00 pm and burial at Highland Memorial Gardens, Bessemer, Alabama immediately after service. Because of Dot’s love for WMU and missions, donations to Annie Armstrong Missions Offering, Eastern Valley Baptist Church, 1216 Potter Avenue, Bessemer, Ala 35020 are appreciated, as are flowers, which she also loved.

Dorothy &#8220;Dot&#8221; Lambert died on March 7, 2021 after a long struggle with heart failure. Her passing was peaceful in the home she shared with her daughter and son-in-law, most recently in North Carolina, the state of her birth. Born... View Obituary & Service Information

The family of Dorothy "Dot" Lambert created this Life Tributes page to make it easy to share your memories.

Send flowers to the Lambert family.