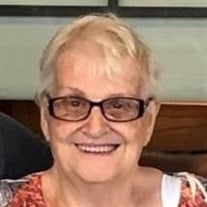 Elizabeth (Charlotte) Parker age 80 of Vance, Al went home to be with the Lord on December 24, 2020. She was a very loving mother and grandmother. She was preceded in death by her parents, Horace and Mary Lou Matthews; brother, Harold Matthews;... View Obituary & Service Information

The family of Elizabeth (Charlotte) Parker created this Life Tributes page to make it easy to share your memories.

Send flowers to the Parker family.