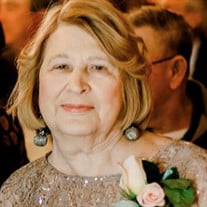 Gay M. Todd, age 77 of Bessemer, AL went home to be with the Lord on March 8, 2019. She was a loving wife, mother, sister and Mimi who touched each person in her family, church, and community in a unique and special way. Her love was unconditional.... View Obituary & Service Information

The family of Gay M. Todd created this Life Tributes page to make it easy to share your memories.

Send flowers to the Todd family.