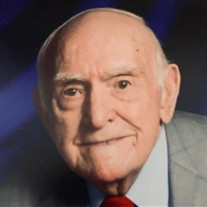 Harlan W. “Red” Brown, 93, passed away on April 18, 2019. Born in Bessemer, Alabama on August 18, 1925, he attended public schools in Tuscaloosa and Fairfield, Alabama. Following high school, he enlisted in the United States Navy. He served in the 2nd Amphibious Forces Unit throughout the Pacific theater during World War II, and was awarded the Silver Star and two Bronze stars for valor in combat. Upon conclusion of his naval service, he returned to Bessemer where he resided for the remainder of his life. He retired from the Bessemer Fire Department in 1977 and subsequently owned a small business in Bessemer. He is survived by his wife, JoAnn Shelton Brown, sons Charlie Brown (Tammy) of Trussville, Alabama, and Gary Brown (Joni) of Vestavia, Alabama. He is also survived by granddaughters Krista Davidson, Kelly Popee, Susan Cates, Robin Turner and Gracie Mahoney. Four grandsons survive him: Thomas Brown, Adam Brown, Neal Brown and Mack Mahoney. He was married to Frances Brown, and was preceded in death by her, and sons, Neal Brown and Stewart Wes Shelton. Red was a faithful follower of Jesus Christ. He loved his church and served as a deacon for over fifty years. He also loved driving, visiting with good friends, traveling, enjoying southern cooking, as well as watching Atlanta Braves baseball and University of Alabama football. The family will receive guests at 10:00 a.m. at the Grant Street Baptist Church in Bessemer on Monday, April 22, with an 11:00 a.m. service to follow. There will be a brief graveside service at Valhalla Memorial Gardens in Midfield, Alabama immediately following the 11:00 a.m. service. Pastor Jared West and Dr. Keith Adams will officiate. In lieu of flowers, the family kindly requests that donations in Red’s memory be made to Grant Street Baptist Church and the Annie Armstrong Missions program.

The family of Harlan W. Brown created this Life Tributes page to make it easy to share your memories.

Send flowers to the Brown family.