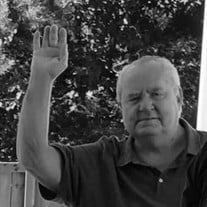 Harry Lynn Hocutt, surrounded by his family, passed away peacefully after a brief illness on Wednesday, March 2, 2022 at the age of 76. Lynn is survived by his wife of 53 years, Julia Hocutt; his son, Joe Hocutt (April); his daughter, Laura Stephenson (Jack); and his grandchildren, Kayla Hocutt, Cole Hocutt, and Jacob Stephenson. He is also survived by his sisters, Louise Bridges, Katie Leland, Ruth Finley, and Clara Mitchell; and his brothers, Herbert Hocutt, and Mike Hocutt. He is predeceased by his parents; his sister, Katherine Hocutt; and his brothers, Gene Hocutt, William Hocutt, Joseph Wayne Hocutt, and Larry Hocutt. Lynn was born in Birmingham on September 1, 1945 to Albert Clay Hocutt and Annie Lou Hocutt. He grew up with 11 brothers and sisters in Birmingham. Lynn served in the Army in the 1960s and received an Honorable Discharge. He was an Elder in the Hopewell Cumberland Presbyterian Church where he formed many lifelong friendships. Lynn had two main loves in his life…fast cars and Julia (Judy) Hocutt. One got him into trouble from time to time, the other gave him two wonderful children and a lifetime of love. Judy and Lynn purchased a lot in Bessemer and then a house in Irondale in the early 1970s and had that house moved and placed on that lot in Bessemer. It was here they raised Joe and Laura, and lived in the same house for nearly 50 years. Lynn worked as a welder for Pullman Steel for nearly 20 years, and then several other fabrication shops over the next 10 years until his knees caused him to retire. He spent the next 25+ years fishing, enjoying Alabama Football, spending time with his family, and eventually becoming Paw Paw to his three grandchildren. Lynn always looked forward to Sundays, when the family would once again gather together at home and eat Sunday Lunch that Judy had prepared. He would have made every day Sunday if he could have, as he never tired of being with family. Lynn was a friend to many people. To know him was to love him, as he had a way about him that just made you feel at home. He was the kind of person that would always ask to help, was always available to give advice, and always had time to talk. He was that friend everyone wants to have in life. But more than that, he was a beloved husband, father, and grandfather. The void he leaves is deep and wide and he will be greatly missed by his family, his friends, and those who knew him.

Harry Lynn Hocutt, surrounded by his family, passed away peacefully after a brief illness on Wednesday, March 2, 2022 at the age of 76. Lynn is survived by his wife of 53 years, Julia Hocutt; his son, Joe Hocutt (April); his daughter, Laura... View Obituary & Service Information

The family of Harry Lynn Hocutt created this Life Tributes page to make it easy to share your memories.

Harry Lynn Hocutt, surrounded by his family, passed away peacefully...

Send flowers to the Hocutt family.