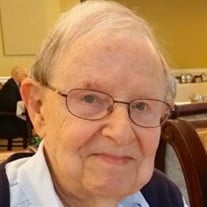 James Deason Freeman, Jr. 95, passed away quietly in Huntsville, Alabama, at the Floyd E “Tut” Fann State Veterans Home on February 26, 2020. J.D., as everyone called him, has now happily joined his loving wife Ardeth in heaven. She had passed away just over a year ago on January 14, 2019. J.D. was born on July 14, 1924 in Flat Creek, Walker County, Alabama, the son of James Deason, Sr. and Genie Strong Freeman. He is survived by his only sister Martha Jean Proctor of Tuscaloosa, Alabama. J.D. lived a very full life growing up in those early years near the town of West Jefferson in Walker County, Alabama. In 1939 his family moved to Northport where his mom had been raised. It was here he attended Tuscaloosa County High School and met the love of his life Ardeth whom he would eventually marry. A few years ago, J.D. said that his mother sent him to the store for some Merita bread. It was in that store that Ardeth Snyder just happened to be working for her father. “I was smitten by Ardeth’s beautiful brown eyes” he said. They also played together in the first TCHS marching band, J.D playing the flute and Ardeth the clarinet. J.D. was a WW II veteran serving in Germany. He was in a tank unit towards the end of the war. After returning from service, he married Ardeth in 1946 and settled in Northport where they raised their two sons Jim Freeman of Birmingham and Barry Freeman of Northern Virginia. J.D. graduated from the University of Alabama with a degree in Electrical Engineering and went on to work with his dad in the family business Freeman Electric Company. As the business grew, he was joined and worked side by side with his wife Ardeth and his sister Martha Jean and her husband Gene Proctor. Freeman Electric and Tuscaloosa Electrical Supply grew and became one of the largest electric motor repair and supply companies in West Alabama. The businesses were sold in 1985 when J.D. and Ardeth retired. J.D. and Ardeth’s retirement years were spent traveling the world. It was not unusual to find them on trips to Israel, Germany, Hawaii or Canada. They spent their first year of retirement in Tucson, Arizona, but decided that they were too far away from their children and grandchildren. They then moved to Birmingham. This allowed them to do exactly what they wanted most, spending quality time with their beloved grandchildren. However, most important in their lives was their faith in Jesus Christ. J.D. and Ardeth were active members of Northport Baptist Church where J.D. served as a deacon for many years. After moving to Birmingham, they joined Briarwood Presbyterian Church where they were involved in Bible studies and were very active sharing their faith. A service of celebration service will be held for James “J.D.” Freeman on Saturday March 7, 2020 at 11:00 am at the Briarwood Presbyterian Church Chapel in Birmingham with a graveside service at Williamson Cemetery in Northport. The family will receive friends at the Chapel beginning at 10:30 am. In lieu of flowers the family requests that donations be made to the Briarwood Presbyterian Missions Program, 2200 Briarwood Way, Birmingham, Al. 35243. J.D. is survived by his sons Jim (Gail) and Barry (Robin), grandchildren Daren (Jessa) Freeman, Brooke (Marc) Istook, Lee Freeman, Sally (Dave) Dills, Jyl Freeman, and Brandon Freeman. Great grandchildren include Harry and Jane Freeman, Lennon and Luke Dills and Alden, Asher and Luke Istook. J.D. is also survived by his sister Martha Jean Procter and sisters-in-law Janelle Larson and Barbara Ferguson.

The family of James Deason Freeman Jr. created this Life Tributes page to make it easy to share your memories.

Send flowers to the Freeman family.