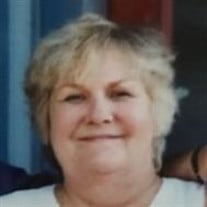 Jean Carol Davis went home to her Savior at 8:40AM Thursday June 27th. Jean is preceded in death by her parents H.W. "Jack" Harris and Edna Lorene Stapp Harris and grandson Caleb Cargile. She is survived by her husband of 43 years Richard Lee Davis, her two sons Mike and Jeff Cargile, Four step-children Ricky, Jim, Jan, and Leesa Davis, two younger brothers Jerry and Phil Harris, and grandchildren Hannah, Jacob, Kara, and Evan Cargile. Jean, (Carol and "JC" to somre) was born in 1942 in Lamar County, Alabama. Early in her childhood her family moved to Lovington New Mexico and that is where Jean spent the majority of her youth. Jean attended the University of Mississippi for Women and went on to marry and start a family in the Tuscaloosa/ Northport area. Years later Jean enjoyed a successful career with the retail chain Parisian eventually acceptin a promotion which moved she and Richard to Birmingham settling in the Hoover/ Riverchase area. Eventually they returned to Tuscaloosa. Throughout her life, Jean always went back to her New Mexico roots. Taking her kids back for family vacations on multiple occasions. She loved family gatherings and was a great cook. Her slow-cooked peas and fried okra were the stuff of legend and as her husband, Richard, was fond of saying as he filled his plate, "This is too much for poor dogs." As Jean's health began to fail, she and Richard moved to McCalla to be closer to family living in Birmingham. There they spent many days enjoying family and watching Braves Baseball and (of course) the Crimson Tide. She also loved hearing from brothers Jerry and Phil. For years, Jerry (an ordained minister) would call "sis" and conduct a bible study over the phone and Phil often sent her mementos from her beloved New Mexico. Just a couple of years ago when Jean was feeling poorly, they both made a surprise visit from Colorado and Oklahoma. Jean made a positive impact on all those who knew her. Her nurses and caregivers all fell in love with her. In her final few days on this earth several from the nursing home came by to pay their final respects. That is a sign of a life well lived. They all professed their love for "Mrs. Davis." We will miss her but are so happy she is whole again. Her legacy is the love and richness she gave to her family and care givers over the years. Family will receive friends Monday, July 1, 2019 AT 10am in the chapel of McCalla Memorial Funeral Home.

Jean Carol Davis went home to her Savior at 8:40AM Thursday June 27th. Jean is preceded in death by her parents H.W. "Jack" Harris and Edna Lorene Stapp Harris and grandson Caleb Cargile. She is survived by her husband of 43 years Richard Lee... View Obituary & Service Information

The family of Jean Carol Davis created this Life Tributes page to make it easy to share your memories.

Jean Carol Davis went home to her Savior at 8:40AM Thursday June...