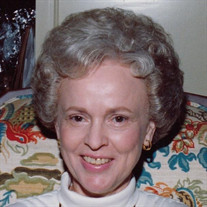 Jennie Faye Eddings Dupriest, 85 years, wife of James W. “Jim” Dupriest of Hoover, passed away Thursday, June 28, 2018, at the Plantation Manor skilled nursing facility. Born May 15, 1933, in Marvel, Alabama, she was a daughter of the late Pleasant Franklin and Annie Bell Eddings. Mrs. Dupriest attended Montevallo High School. A picture of the young 17-year-old beauty captured the heart of a soldier. A homesick classmate of Jennie Faye’s was going through basic training at Fort Knox, and they wrote each other often. Jim Dupriest was also attending school at Fort Knox. Jim discovered a picture of Jennie Faye and was able to obtain her address. They began corresponding in July 1950. Three months later, the pen-pals met, and a marriage proposal was imminent. The two married on December 23, 1950; a brief courtship that yielded lasting devotion. Jim and Jennie Faye were married 67 years, 6 months and 4 days. She remains the love of Jim’s life. Jennie Faye placed God first in her life and took deep pride in her role as homemaker, wife, mother, and grandmother. She was an active member of Dominion Baptist Church in Pelham. A well-traveled woman, she lived in Alabama, Kentucky, Oklahoma, Nebraska, the Panama Canal, and Italy. Wherever Jennie Faye resided, she cherished Psalm 48, verse 14: For this God is our God for ever and ever: He will be our guide even unto death. She is survived by her husband, Jim Dupriest; two children, Annell Mooney and her husband Mike of McCalla, and Joseph Dupriest and his wife Donette of Columbiana; three grandchildren, Jennie Alspach (Matt) of Hoover, Michele Earwood (Frank) of Helena, and Brenton Dupriest; six great-grandchildren, Parker, Gracie, and Evan Alspach of Hoover, and Tyler Hicks, U.S. Army, Ft. Hood, Texas, and Abby and Patrick Earwood of Helena. She is also survived by her sister Margaret Weldon of Birmingham and multiple nieces and nephews. Jennie Faye was predeceased by her parents and brothers R. F., Charles Alfred, Edgar Reed “Joe,” Claude “Buddy,” James “Tamp,” William “Bill,” Melford Farris, and Marvin Eddings, and sister Evelyn “Kit” Hall. Visitation will be Monday, July 2, 2018 from 10 AM until service time at 11 AM at McCalla Memorial Funeral Home. Interment will follow at Montevallo City Cemetery.

The family of Jennie Faye Eddings Dupriest created this Life Tributes page to make it easy to share your memories.

Send flowers to the Dupriest family.