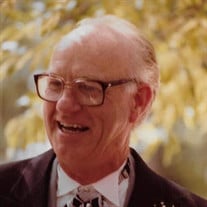 Ed Lewis, 94, of West Blocton passed away on Friday, April 13, 2018. He was born in 1924 in a home behind the old drugstore in West Blocton. His father worked in the nearby coal mines for several years and then moved his family to Birmingham, where Ed attended Phillips High School. Following that Ed attended two technical schools in Birmingham learning how to work on airplane engines. In World War II he served from 1943 to 1946 in the Pacific on the USS Yorktown (Navy Carrier), first as a plane handler and then as an electrician. The Yorktown won the Presidential Citation for its service during this period. Ed earned the nick-name “Flash” from his shipmates, as he was often spotted running from here to there in a “flash.” Following his time in the Navy, he worked for 35 years at US Steel in Fairfield as an electrician. During this time he and his wife, Christine, raised their family in the Woodstock community, where he became very active in community improvement. In the 1960’s and 70’s he held several offices in the Woodstock Civitan Club. He helped in the fundraising and building of the Strickland Memorial Civitan Center. He helped with the operation of the Woodstock Ball Park and served as Lieutenant Governor of Alabama Central District of Civitan International and Project Chairman for establishing Tannehill State Park. He worked through the Civitans to establish the Tannehill State Commission, on which he served for eight years. With others, he organized the Cahaba River Authority (CRA). This organization is an arm of the Bibb County Commission. He and others worked through the CRA to pass legislation establishing the Cahaba Trace and the Cahaba Trace Commission. The CRA acquired land for the Bibb County Commission, which is now the Bibb County Glades, owned by the Nature Conservancy. Ed also served a year on the Bibb County Industrial Board acquiring 25 acres from Weyerhaeuser Corporation for what is now the Western Plaza Shopping Center. He worked with US Steel to leave scenic trees as a buffer along Bibb Highway 24 and to rename this highway the "Vietnam Memorial Highway". He worked with the CRA and other groups to create interest in what is now the Cahaba River National Wildlife Refuge, to establish State Scenic Designation for the Little Cahaba River plus many other local conservation projects. His greatest joy was in spending time with his family and friends and in being outdoors on his mountaintop property in rural Bibb County. He is survived by his wife of 70 years, Christine, his four daughters Beverly Odt (Thomas), Sara Cofield (Bob), Suzanne McKinley (Co. James L.) and Lisbeth Nichols (John), his five grandchildren Megan Dziekan, Jayme Baumgardner (Kurt), Robert Cofield, Christine Precure (Stuart), Elise Cofield and his two great-grandchildren Lilianna and Kinley Dziekan. He is also survived by his siblings Edna Morris, Jo Jones, Mary Ann Burnham and Charlie Lewis. The family will receive friends on Tuesday, April 17, 2018 from 10:00 a.m. to 11:00 a.m. at the McCalla Memorial Funeral Home. Funeral services will begin at 11:00 a.m. in the chapel. Burial will follow at 2:45 p.m. at the Alabama National Cemetery in Montevallo. In lieu of flowers, the family requests memorial donations be made to Reno Baptist Church in Caffee Junction.

Ed Lewis, 94, of West Blocton passed away on Friday, April 13, 2018. He was born in 1924 in a home behind the old drugstore in West Blocton. His father worked in the nearby coal mines for several years and then moved his family to Birmingham,... View Obituary & Service Information

The family of Johnnie Edward Lewis created this Life Tributes page to make it easy to share your memories.

Send flowers to the Lewis family.