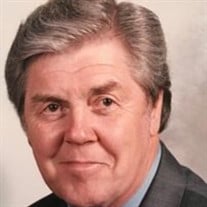 Johnny Martin Hopkins, of Bessemer, Alabama passed away on Tuesday, June 16th, 2020 at the age of 76. He passed peacefully with his wife, Evelyn by his side. Johnny was born on June 6, 1944 in Bessemer, Alabama to Jasper and Anna Jean (Johnson) Hopkins. In 1960, he met the love of his life, Evelyn Myree Chase. They were married on November 10, 1961. He shared 60 wonderful years with “his girl.” Together, Johnny and Evelyn raised 3 children: Shelia, Jeff, and James. Johnny leaves a legacy that will not be soon forgotten. His great love for the Lord and his family was immediately apparent to anyone he met. He was also known for his kindness, his generosity, his laughter, and willingness to lend a helping hand to anyone in need. Johnny was preceded in death by his parents, his sister, Louise Hopkins, and his brother, Arthur Hopkins. He is survived by his wife Evelyn Hopkins, his brother Eugene Hopkins (Sandra), his sisters, Bettye Fluker (Wayne), Jeanette Cooley, and Patricia Lewis, as well as his sister in law, Billie Ruth Hopkins, his three children, Shelia Cates (Danny), Jeff Hopkins (Sherry), and James Hopkins (Cassidy). He is also survived by his 4 grandchildren: Kayla Cates Knight (Bradley), Stefany Hopkins Horsley (Chris), Kristine Cates Lamar (Joshua), Shanna Hopkins, and his 2 great-grandchildren, Ayden Horsley and Elijah Knight. The family will greet friends from 6:00 to 8:00pm on Friday, June 19th at McCalla Memorial Funeral Home, and again from 10:00 to 11:00am on Saturday, June 20th at Caffee Junction Church of God. The funeral service will follow. Interment will follow at Hopewell Church of God Cemetery. The Hopkins family would like to extend their gratitude to all of the staff at Comfort Care Hospice for the care they provided to Johnny and his family. In lieu of flowers, donations can be made to One Child Fund, 3720 NW Keith Street, Cleveland, TN 37312.

Johnny Martin Hopkins, of Bessemer, Alabama passed away on Tuesday, June 16th, 2020 at the age of 76. He passed peacefully with his wife, Evelyn by his side. Johnny was born on June 6, 1944 in Bessemer, Alabama to Jasper and Anna Jean (Johnson)... View Obituary & Service Information

The family of Johnny Martin Hopkins created this Life Tributes page to make it easy to share your memories.

Johnny Martin Hopkins, of Bessemer, Alabama passed away on Tuesday,...

Send flowers to the Hopkins family.