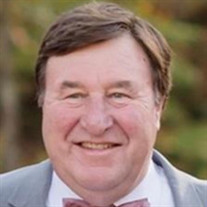 On Sunday, January 24, 2021, Jon Batton Terry, age 68, of Bessemer, Alabama, went to be with his Lord and Savior Jesus Christ after a long battle with cancer. He is preceded in death by his parents, Joe Luther and Margaret Batton Terry. He is survived by his loving wife of 47 years, Betsy Towers Terry; his children, Rachel Fleming (Jeremy) and Jon David; his beloved grandchildren, Anna Claire, Hoyt and Ellie Batton Fleming; his siblings, Joe Terry Jr. (Kit), Mary Jane Sisson (Bill), Margaret Lou White (Bill), and Jack Terry (Lisa); cousins, the Honorable Tom Parker, Chief Justice of the Supreme Court of Alabama (Dottie), Alleta McKeon (Paul) and Terry Parker; and numerous nieces, nephews, great nieces and nephews, and countless friends and colleagues. A graduate of Bessemer High School (1970), Jon went to Samford University (1974) where he served as a student senator and was also a member and Commander of Sigma Nu fraternity. Jon went on to graduate from Cumberland School of Law (1977), where he served on the Cumberland Law Review. After law school, he went on to clerk for the Honorable Hugh Maddox, Associate Justice for the Supreme Court of Alabama, where he gained invaluable legal experience. He began his practice of law with Lee Bains on June 1, 1978, where he became partner several years later. He practiced law at Bains and Terry until the time of his death. Jon was also an Eagle Scout with the Boy Scouts of America during his high school years, and was an avid hunter, fisher and outdoorsman as a result. He was also an avid fan of the University of Alabama football team and attended many games and championships with his beloved wife, Betsy. Jon loved the practice of law, which he was so proud that his children chose to follow in this profession. Above all, however, Jon was proudest of his three grandchildren, who love their “Big Daddy” dearly. A grave-side only service will be held on Friday, January 29, 2021 at 2:00 p.m. at Cedar Hill Cemetery in Bessemer, Brother Joel Fredrick officiating. Masks and social distancing will be required. Jon was a long time member of Grace Life Baptist Church, and in lieu of flowers, the family asks that donations be made to the Grace Life Baptist Church Building Fund, 6200 Lou George Loop Road, Bessemer, AL 35022. Pallbearers: Vince Brown, Nigel Gunthrap, Billy Patton, Jason Riles, Coleman Terry, Ellis Terry, Tommy Tucker, and Drew White.

On Sunday, January 24, 2021, Jon Batton Terry, age 68, of Bessemer, Alabama, went to be with his Lord and Savior Jesus Christ after a long battle with cancer. He is preceded in death by his parents, Joe Luther and Margaret Batton Terry. He... View Obituary & Service Information

The family of Jon B. Terry created this Life Tributes page to make it easy to share your memories.

Send flowers to the Terry family.