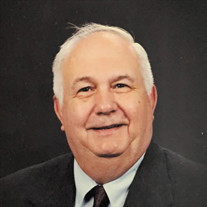 Joseph (Joe) (Pjoe) Edward Biddy Sr., of Bessemer, Alabama passed away at the age of 84 years old on Wednesday, March 31, 2021. He was surrounded by his loving wife, Brenda Sims Biddy and family till the very end. He is survived by his wife of almost 62 years, Brenda Sims Biddy, children Catherine Biddy Carter Hitt (Tiger), Joseph E. Biddy Jr. (Susan), Kristina Biddy Sheppard (Jerry), Laura Biddy Johnson (Chuck), Grandchildren Forrest LeAlan Carter, Jr.(Devin), Justin Thomas Carter (Courtney),Ben Hitt (Erin), Heather Hitt Hicks (Kyle), Lauren Biddy Smitherman (PJ), Chandler Biddy, Joshua W Sheppard (Maliah), Grace Sheppard, Trey Johnson (Haley), Rebekah Johnson, Aaron Johnson (Michaela) and 11 great grandchildren. Joe Biddy grew up in Concord and Ensley Alabama. It was not an easy life for him, losing his mom when he was 8 and his dad when he was 16. He was cared for by his great aunts from Ensley to Georgia. He also lived with his brother, John Biddy and his family until he graduated from McAdory High School in 1955, and then joined the Air Force. While on leave one May in 1959 and home visiting family, Joe went out on a date with a beautiful freckled blue eyed girl, and fell madly in love with Brenda. They were married 3 weeks later, they spent the next 20 years stationed all over the United States where their four kids were born from: Washington, Massachusetts, Mississippi, California, Texas and New Mexico. He loved being a Master Sergeant in the Air Force as a Missile System analyst tech, The Air Force was one of his proudest accomplishments, He loved serving his country, loved the American Flag and made lifelong friends wherever he lived. In 1975 he retired from the Air Force and settled in Bessemer, Alabama. He taught at Bessemer Tech, Wallace State College and received his Master’s Degree from UAB. He also worked around the country writing training programs for Nuclear Power plants. As a member of Morgan Methodist Church, he served by being on the Board, teaching Sunday School and whatever else was ever asked of him. He was a member of the Flint Hill Masonic lodge since 1959. He loved being outdoors, Fishing, Bird watching and just hanging out with Family was his favorite. He may have had a rough early life, but God carried him though it all and greatly blessed him with family and friends who loved him dearly! He will be greatly missed.

Joseph (Joe) (Pjoe) Edward Biddy Sr., of Bessemer, Alabama passed away at the age of 84 years old on Wednesday, March 31, 2021. He was surrounded by his loving wife, Brenda Sims Biddy and family till the very end. He is survived by his wife... View Obituary & Service Information

The family of Joseph Edward Biddy created this Life Tributes page to make it easy to share your memories.

Send flowers to the Biddy family.