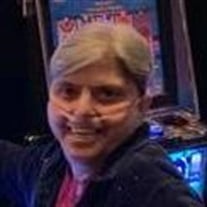 Karen Humphryes Roberts, age 58 of McCalla, AL gained her wings on October 3, 2019. She was a loving wife, mother, grandmother, sister, aunt and friend of many. She was preceded by her son, Kerry Densmore; father, Wiliam Brady Humphreys, Jr.;... View Obituary & Service Information

The family of Karen Humphryes Roberts created this Life Tributes page to make it easy to share your memories.

Send flowers to the Roberts family.