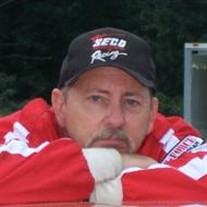 Kenneth “Kenny” Maxwell Knight, Jr. won his long, difficult fight with cancer when he triumphantly stepped into heaven on January 16, 2019. Kenny was born 9-20-1956 and lived in Clayton, Alabama until age for 13 years. His family moved to Lipscomb, Alabama where he attended Lipscomb Jr. High and graduated from Bessemer Academy in 1975. He met the love of his life, Dawn Dorroh when they were young teenagers, when they both worked at McDonald’s in the Central Park area of Birmingham. They celebrated their 40th Wedding Anniversary on December 1, 2018. Ken is Father to Kevin Knight and Kris Knight (Laura Lee) and Pops to his treasured granddaughter Landry Claire Knight. Nothing was more important to Kenny than his family and he proved that daily. He loved spending time at the cabin at Smith’s Camp on the Warrior River as it was a place of rest and relaxation. Ken is also survived by his sister Libby (Sonny) Hosmer, brother Larry Knight, beloved mother-in-law Juanita J. Dorroh, his sister-in-law Denise Dorroh Kivette (Rick), uncle Bernard Horn and his uncle Wayne Horn with whom he shared a special relationship. Ken has several nieces, nephews, cousins, extended family and a multitude of friends who love him dearly and will miss him. Except for a brief period of time at Pullman Standard he worked for Dorroh Heating and Air Conditioning, Inc. until he and Dawn purchased the company upon the retirement of his beloved father-in-law, Ross “Shag” Dorroh. Kenny always loved anything with a combustion engine or wheels as long as he could make it go fast and it looked good. His drag racing family will talk about his exploits for years to come. But most of all they will remember his honesty, compassion and his uncanny ability track down anything and to fix anything that did not involve carpentry! Fortunately, he could barter car advice for the carpentry skills of his brother-in-law and nephews. The family sends heartfelt thanks to the hematology and oncology staff at Brookwood Hospital, especially Dr. Bridges his Oncologist with whom he shared a love of cars, Dr. Thompson, Ken’s Surgeon and Dr. Agarwal his GI Doctor. Dawn’s friends and co-workers from the Pediatric Pulmonary department at Children’s Hospital of Alabama exemplified God’s love and went beyond caring and compassion. The were truly the feet and hands of Jesus during Ken’s illness. “Where there is a tremendous grief, there is also a tremendous love.”

Kenneth &#8220;Kenny&#8221; Maxwell Knight, Jr. won his long, difficult fight with cancer when he triumphantly stepped into heaven on January 16, 2019. Kenny was born 9-20-1956 and lived in Clayton, Alabama until age for 13 years. His family... View Obituary & Service Information

The family of Kenneth Maxwell Knight Jr. created this Life Tributes page to make it easy to share your memories.

Send flowers to the Knight family.