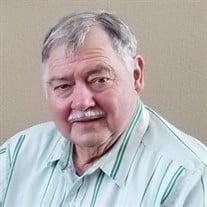 Larry Keith Wray, age 74, passed away peacefully on Tuesday, March 1, 2022, surrounded by his loving family. We are deeply saddened by his death, but rejoice in the memories and faith that now sustain us. Larry is survived by his wife Clara Wray, sister Jewelle Ruth Wray (Stanley), two children Gary (Cheryl) Wray and Angelia (Steve) Bush, grandchildren Lori (Rachel) Grooms, McKenna (Jake) Erwin, Steven (Grace) Bush, Delaney Wray, and Sydney Wray, and 8 great grandchildren, along with nieces and nephews and many, many friends. He’s preceded in death by his parents Carl and Margie Wray and granddaughter Kelly Bush. Born on April 25, 1947 in Pontotoc, Mississippi, Larry moved to Alabama as a youngster with his parents and sister Jewelle; after graduating from Hueytown High School, he began work as an electrician at ACIPCO and continued there for approximately 40 years until his retirement. Larry married the love of his life, Clara, in 1965 and together they raised Gary and Angel with a fierce love. He worked long and hard hours just so he could take the family on vacations to the Smoky Mountains; when it rained so hard one year that their tent flooded, he worked to save money and buy a camper so that they could camp easier (and drier). His hard work made his family feel like they had all they needed. He was an avid hunter in his younger years and an avid fisherman more recently. He taught his children to love hunting and fishing as well and they shared many happy hours together in hunting blinds and on boats. He loved to read and watch Western movies, and enjoyed listening to “real” country music from Waylon Jennings and the like. His family still remembers with fondness (and a little irritation) how in the early 1980s he recorded an 8-track tape with every other song on it as Kenny Rogers’ “The Gambler.” He loved to grill and barbecue for friends and family members, serve as the patriarch at large and loud family gatherings, and spend time with his beloved pet dogs. Larry came to his faith later in life, confessing his faith in Christ and joining Hueytown’s North Highland Baptist Church in the mid-1990s. He served as a faithful member and then a deacon, and worked with the Southern Baptist Disaster Relief organization among other ministries. He was always willing to do whatever he needed for the church he loved so much. And he prayed that those closest to him would learn to trust in Jesus like he had. As his family grew, his love and care multiplied. His grandchildren and great grandchildren soon learned that he could be strong and firm, and just as equally gentle, accepting, and kind. They will miss his bear hugs and his “I’m proud of yours"; his calming prayers at family meals and holidays; and his infectious laugh and mischievous grin. Words and phrases used by his grandchildren to describe their PawPaw include “caring,” “generous,” ‘kind,” “jolly,” “loving,” “accepting,” “patient,” “selfless,” and “a man of great unwavering faith who truly walked with Jesus.” Great is our loss of our Larry, Dad, and Pawpaw. But great is heaven’s gain.

Larry Keith Wray, age 74, passed away peacefully on Tuesday, March 1, 2022, surrounded by his loving family. We are deeply saddened by his death, but rejoice in the memories and faith that now sustain us. Larry is survived by his wife Clara... View Obituary & Service Information

The family of Larry Keith Wray created this Life Tributes page to make it easy to share your memories.

Send flowers to the Wray family.