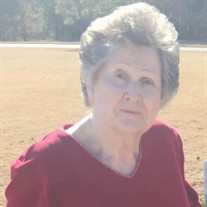 Lorene Elizabeth (Hyde) Rhodes, age 90, passed away peacefully into the arms of Jesus Christ on October 30, 2020. She was a charter member of Riverchase United Methodist Church, which was founded 40 years ago. She was a strong yet very kind and loving woman, who after being a homemaker and raising three children for 30 years, went back to school and passed her Realtor’s exam, becoming a member of the Birmingham Board of Realtors. She later became an associate broker after passing that examination. She, along with her husband Charles, founded C&L Rhodes Realty Company. They also worked for several of the large real estate firms in the Birmingham area. Lorene and her husband Charles lived for many years in the Bessemer area, and they were married for 64 years at the time of his passing in 2011. They were members of the greatest generation, who lived through the Great Depression and World War II and thrived in life through hard work and the lessons learned from those hard times. She was preceded by the passing of her husband, Charles Rhodes (2011), parents Albert Eugene and Lillian (Meacham) Hyde, Brothers William E. “Bud” Hyde (Betty), Charles W. “CW” Hyde (Sue), and sisters Mary Evelyn (Hyde) Williams, and Ellen (Hyde) Rogers (Edward-not deceased). She has a living brother, Kenneth E. Hyde (Bonnie). She leaves behind a legacy of love to her three children Charles Daniel Rhodes (Evelyn), Marilyn Rhodes Busby (Rickey), and Charles David Rhodes. Grandchildren Daniel Perry Rhodes, Natalie Rhodes Newkirk (John Allen), Richie Busby (Shana), and Kimberly Busby Dye (Jonathan). Great grandchildren Avery Busby, Kate Busby, Palyn Dye, Breelyn Dye, and Dalton Dye, along with many nieces and nephews. She was very proud of her professional accomplishments, but her greatest joy and loves of her life were her three children. She truly defined herself first and foremost as a loving mother. Her greatest wish at the end of her life is that her children and family live a happy and Godly life for as long as they can. Services for Lorene will be on Thursday November 5Th at McCalla Memorial Funeral Home. Visitation if from 10-11 am with the service from 11-11:45 am. Interment will follow at Alabama National (Veterans) Cemetery in Montevallo, Alabama. In lieu of flowers, the family asks for donations to the American Cancer Society.

Lorene Elizabeth (Hyde) Rhodes, age 90, passed away peacefully into the arms of Jesus Christ on October 30, 2020. She was a charter member of Riverchase United Methodist Church, which was founded 40 years ago. She was a strong yet very kind... View Obituary & Service Information

The family of Lorene H. Rhodes created this Life Tributes page to make it easy to share your memories.

Send flowers to the Rhodes family.