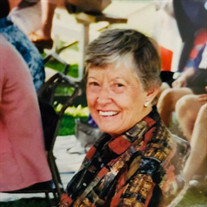 Margaret Kuchins Elm, age 102, was born on February 13, 1919 in Bessemer, Alabama. She passed away on September 11, 2021. She was predeceased by her mother, Margaret Lewis Kuchins, her father Charles R Kuchins, her husband James Wilmot Elm, and her adopted daughter Mildred (Millie) Elm Price. She is survived by her Son-In-Law, Gwin Price of McCalla, Alabama. Margaret’s early education took place in her hometown of Bessemer, Alabama, but her high school graduation happened in Miami, Florida from Miss Harris School for Girls. She attended the University of Alabama but graduated from the University of Southern California with a degree in art and education. She later earned her Master’s Degree in education from The University of Alabama. She served in Bermuda as an American Red Cross aid during World War II, and spent most of her remaining career as a grade school teacher in Jefferson County, Alabama. She became an avid world traveler, and spent a lot of her retirement time living in California as well as her home in Bessemer. She was a member of the First Church of Christ Scientist in Bessemer and Birmingham, Alabama, where she taught Sunday School and served as a reader. She was also an active supporter of the Trinity Episcopal Church of Bessemer and contributed to various worthy charities and organizations. Margaret and her family would like to especially thank her multitude of caregivers, friends, and former students who have cared for, visited, and cheered her on during many years of enduring Parkinson’s Disease, Dementia, and other health problems. These individuals have helped to make her later years easier and have added an important enrichment to her long and well lived life. All COVID19 precautions are requested.

Margaret Kuchins Elm, age 102, was born on February 13, 1919 in Bessemer, Alabama. She passed away on September 11, 2021. She was predeceased by her mother, Margaret Lewis Kuchins, her father Charles R Kuchins, her husband James Wilmot Elm,... View Obituary & Service Information

The family of Margaret Kuchins Elm created this Life Tributes page to make it easy to share your memories.

Send flowers to the Elm family.