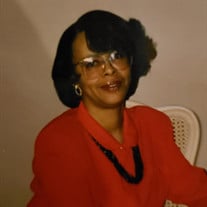 Marguerite P .Chism Daughter Of Lorenzo P.Glascoe and Dorcas V. Glascoe was born in Washington, DC August 17,1946. She departed this life February 24,2022. Her formative years were spent in Washington with her parents and siblings, brothers, Craig and DeWinter (Tuffy) and sister Esther. Educated in the DC Public Schools and afterwards receiving training in Dental Assisting.. She worked with the late Dr. Iboo Mohammed for seventeen years. During that time she met and married Bertram Chism. They had two children Annette Marie and Paul Antony. She was the hands on mom participating in their school and extra-activities full on. She received an award from the Boy Scouts of America for her outstanding work as a Den Mother. In 1991 the family moved to her husbands native home of Alabama, She wanted new work challenges as well, She worked for the Southeastern Bible College, Blue Cross and later with Jemison Demsey Metals from which she retired. Many personal friendships and business relationships were formed at Jemison as she coordinated the efforts of four locations. Her natural affection for children garnered her the love and respect of the children and grandchildren of many family friends. They called her aunt Marguerite, Mrs. Chism, or the "The Sheriff" because of her no-nonsense approach to discipline. She leaves to treasure her memory her husband, Bertram ,son, Paul Sr and wife, Tawanna, grandsons. Paul Jr. Tristen. Granddaughters, Kiera, Destiny, Alanna and DeOni. One great granddaughter, Aiiyah lovingly called "nugget", her mother Dorcas Glascoe, brother Winter, sister Esther, nieces, Cora, Lisa and Cara. Out of Covid concerns, the memorial and internment will be by the family. In lieu of flowers the family requests donations be made to the DCH foundation in memory of Mrs. Chism. Information may be found at the DCH Regional website. The family wishes to thank you for your expressions of love that comfort us. May God bless you.

Marguerite P .Chism Daughter Of Lorenzo P.Glascoe and Dorcas V. Glascoe was born in Washington, DC August 17,1946. She departed this life February 24,2022. Her formative years were spent in Washington with her parents and siblings, brothers,... View Obituary & Service Information

The family of Marguerite P. Chism created this Life Tributes page to make it easy to share your memories.

Send flowers to the Chism family.