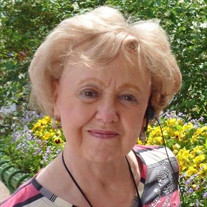 Merdith (Mert) McFerrin Byram, age 78, ascended to her heavenly home on Monday, November 11, 2019. Born February 20, 1941, Mert was a long time resident of Bessemer/McCalla, Al. She was raised in Concord, Alabama, an only child to the late Merl and Audette McFerrin. A graduate of Hueytown High School, she continued her education earning a bachelor’s degree from the University of Montevallo and a masters degree and PhD from the University of Alabama. After graduation, she worked her way from Science Teacher to Counselor; to Principal of West Hills Elementary School; and on to Director of Pupil Personnel for Bessemer City Schools, the position from which she retired. She was recently described by one of her past student’s parent as a beloved principal who truly cared for her students and celebrated their accomplishments. In addition to her work career accomplishments, Mert was a community leader with “dedicated service to the community, irrefutably successful leadership, impeccable integrity, strength of character and formidable use of personality” (according to the Jefferson County Historical Commission when awarding her the Thomas Jefferson Award for excellence in historical leadership). Some of Mert’s many leadership positions and past accomplishments include: first female President of the Bessemer Kiwanis Club; Kiwanian of The Year; President of Bessemer Main Street; President and later advisor to the Bessemer Hall of History; board member of the West Jefferson County Historical Society; Chairman of the Jefferson County Historical Commission and recipient of the Thomas Jefferson Award for her meticulous eye for historic significance and preservation efforts; board member and President of the West Jefferson Technical Education Endowment and Trust Foundation; board member of the Salvation Army; board member and secretary of the YMCA, board member of the Bessemer Area Chamber of Commerce and recipient of the prestigious Charles A. Long Outstanding Civic Award. Mert once described herself as “a professional street walker who is not paid a dime," in jokingly referring to her work for Bessemer Main Street and some of her many community fund raising efforts. In 1987, at the request of civic leaders in Bessemer, she served as Chairman of the year-long Centennial Celebration for the City, which included overseeing the work of sixty working committees and numerous events. During that same year she completed her doctoral dissertation and orals while holding down her job as a school principal. An amazing accomplishment. For many years, Mert was also a mainstay in the First Presbyterian Church of Bessemer, serving as the Clerk of Session, an Elder, working with the Presbyterian Women’s organization and as the church historian. In 2008 she served as a Commissioner representing the Presbytery of Shepherds and Lapsley at the General Assembly of the Presbyterian Church in the United States of America. A current member of Shepherd of the Valley Presbyterian Church, Mert played a key roll in the building and establishment of the church. Mert is survived by her loving husband, Jim Byram; daughter Daye Butler (Ryan); her in-laws who quickly adopted their only child sister-in-law as one of their own: Bob Byram (Judy) of Pelham; Pam Nichols (John) of North Shelby County; Bill Byram (Rita) of Pinson. Additional survivors include special cousins Vera Higgins; Tommy & Donny Stephens; Susan Hubbard; and Linda Grubbs; as well as nieces and nephews; and a host of dear friends. In the final days of her earthly life, in addition to the loving care of her family and friends, the family expresses appreciation to the compassionate health care professionals who assisted with her care including care givers Beth Hosmer, Grace Northcutt, and Camilla Pate. In lieu of flowers, the family requests that memorials be made to the Presbyterian Children’s Home (phfc.org) or the Salvation Army (salvationarmyusa.org). Visitation will be held on Thursday, November 14 from 5 to 8 pm at McCalla Memorial Funeral Home with a funeral service on Friday, November 15, 11 am at Shepherd of the Valley Presbyterian Church and burial following at Cedar Hill Cemetery. McCalla Memorial Funeral Home directing.

Merdith (Mert) McFerrin Byram, age 78, ascended to her heavenly home on Monday, November 11, 2019. Born February 20, 1941, Mert was a long time resident of Bessemer/McCalla, Al. She was raised in Concord, Alabama, an only child to the late Merl... View Obituary & Service Information

The family of Merdith Marie Byram created this Life Tributes page to make it easy to share your memories.

Send flowers to the Byram family.