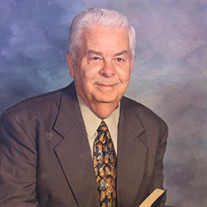 Bro. Milton Duncan Simpson, 87, went to his heavenly home to be with the Lord and Savior Jesus Christ on May 8, 2021 at his residence in Woodstock, AL. He was preceded in death by his parents, Bryant and Gladys Simpson, his brother, Luther Simpson, his sister, Kathryn S. Vickery and his grandson, Jeremy Clay Simpson. He is survived by his wife of 69 years, Glenda Chambers Simpson; his sons, Robert "Pep" Simpson, Clay Simpson (Barbara); three granddaughters, Keysha Thomaston (Kenneth), Ariel Donner (Clint), Courtney Simpson; two great-granddaughters, Morgan and Melody. Visitation will be held at McCalla Memorial Funeral Home on Tuesday, May 11, 2021 at 1:00PM and the service will begin at 2:00PM. There will be no graveside service. Milton Simpson accepted Jesus Christ as his Lord and Savior at the age of 16 and was called by God shortly afterwards to preach the Gospel. He began his ministry at the age of 18 in 1952 with the support of his wife Glenda Chamber Simpson, also a professed Christian.He pastored his first church at the McCalla Baptist Church in McCalla, AL while he was a senior in high school. He graduated from McAdory High School in 1953 where he played sports in football, basketball and baseball. He attended Walker Junior College in Jasper, Al and Southeastern Bible College in Birmingham AL. Bro Simpson pastored for 69 years at 17 churches. They were: Central Baptist, Providence Baptist, New Canaan Baptist, Union Grove Baptist, Antioch Baptist, Concord Baptist, Bethel Baptist, Hopewell Baptist (near Canton Georgia), Mountain View Baptist, Duncanville Baptist, Mt Carmel Baptist, Reno Baptist, Grant Street Baptist, Lucille Baptist, Little Hurricane Baptist and Abernant Baptist. Although he pastored many churches during his 69 years in the ministry and held many revivals throughout several states, he knew the main purpose of his Calling was to lead as many people to a profession of faith of their belief in the Lord Jesus Christ and many did just that. Not only did Bro. Simpson lead many to Jesus Christ, God also allowed him and his wife, Glenda, to see their children, grandchildren and great grandchildren become professed Christians. In 1969, Bro. Simpson was led by the Lord to take his wife and two sons to a once small mining town called West Blocton, AL. There, he became the pastor at Mt. Carmel Baptist Church. After a year or so of prayer and seeking God’s guidance, he realized there was a need of a new and bigger church. He brought the idea to his members and the majority agreed that now was the right time to build.With the help of his wife Glenda, she made the blueprints for the New Church and all the men and women went to work. The new Mt Carmel Baptist Church was completed in 1971. In the early 80’s, Bro. Simpson was led by the Lord to go to another church.For several years he pastored Reno Baptist Church during 2 different terms.There, with the support of his family, friends and church members, an Educational Building was built.In 1992, Bro. Simpson was led by the Lord to return back to Mt Carmel Baptist Church in West Blocton to serve as pastor for 13 years.Again, through Spiritual guidance and the support of his family, friends and church member, a Family Life Building was built to complement the church. No matter where Bro. Simpson served as Pastor, there was usually some type of building and renovation project completed. During his ministry, he ordained many young men, some of whom are: Charles Rice, Dickey Bowling, Louie Wade, Rip Mecham, Johnye Horton, Dennis Horton, Kenny Hatcher, Roger Reach, Ryan Lucas and many others. Throughout the years in the ministry, he performed thousands of baptisms, weddings and funerals.He visited many people in the hospitals and in their homes to share the Gospel.Bro. Simpson was a shepherd and a leader. The most important thing to him was to teach and preach God’s word and lead someone to Jesus Christ. He was always thinking of ways to bring people together. Bringing people together gave him the opportunity to witness and tell people that Jesus Christ loves them unconditionally and tell them what Jesus Christ has done for them in hope to lead them to Christ. Again, with the help of his family, friends and church members, Bro. Simpson organized annual turnip green, suppers, fish fry gatherings, church trips, Christmas Senior Citizen Day, teacher luncheons, Breakfast with Santa, Vacation Bible School and Fall Festivals. With his faithful helpers, he built houses, wheelchair ramps and roofs for those in need.He also loved farming, raccoon hunting which was always a good opportunity to share with others the Gospel and talk about Jesus Christ. Bro. Simpson, called by God, to teach, preach and share his knowledge and wisdom of the Bible with others, will be forever remembered and greatly missed.

Bro. Milton Duncan Simpson, 87, went to his heavenly home to be with the Lord and Savior Jesus Christ on May 8, 2021 at his residence in Woodstock, AL. He was preceded in death by his parents, Bryant and Gladys Simpson, his brother, Luther Simpson,... View Obituary & Service Information

The family of Milton Simpson created this Life Tributes page to make it easy to share your memories.

Bro. Milton Duncan Simpson, 87, went to his heavenly home to...

Send flowers to the Simpson family.