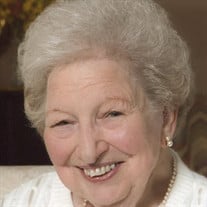 Muriel W. Stewart, 93, of McCalla, AL died peacefully on April 7, 2019 with her family and friends by her side. She was born June 13, 1925 to the late Roy and Celeste West in Birmingham, AL. She attended West Jefferson and Dora High Schools. She married Robert (Bob) Stewart, Jr. on July 12, 1945. Bob served in the U.S. Marine Corp during World War II and they started their married life in San Diego, CA. After the war, they lived in the Birmingham area. Muriel is survived by her daughters: Mary Stewart (Polly) of Birmingham, AL; Patricia Stewart (Laura) of Auburn, AL; Susan Long (Kevin) of McCalla, AL. She is also survived by her grandson Chris Long (Danielle) and expected great grandson of Anacortes, WA; granddaughter Madeline Garrett (Jake) of Trussville and step granddaughter Kate Colbert (Jamie) and their children Sarah Grace, Vivian Jane and Laura Batson of Hoover, AL; her sister Lynette Hosmer (Joe) of Pleasant Grove and a host of other family members. Muriel was preceded in death by her loving husband, Bob. They shared 65 wonderful years of marriage. Muriel and Bob’s favorite times were spent traveling with family and friends especially to the beach. They both loved having their “best buddy” Brutus traveling with them on their RV adventures. Muriel will always be remembered for her strength, her great faith and her unconditional love for her daughters. The family wants to give special thanks to Muriel’s Auburn caregivers: Ruby Echols, Rolonda Scott, Jessica Henderson and Dr. Steven Presley. The family is also thankful for all the services and care provided by Compassus of East Alabama Palliative and Hospice Care. Visitation will be held April 9,2019 from 11:00 am to 12:00 pm at the Baptist Church at McAdory, 4954 Eastern Valley Road, McCalla, AL, 35111. A celebration of Muriel’s life will begin at 12:00 pm with internment at Freewill Baptist Cemetery, West Jefferson, AL. In lieu of flowers, the family requests donations be made to the Lee County Literacy Coalition or to East Alabama Medical Center Cancer Center.

Muriel W. Stewart, 93, of McCalla, AL died peacefully on April 7, 2019 with her family and friends by her side. She was born June 13, 1925 to the late Roy and Celeste West in Birmingham, AL. She attended West Jefferson and Dora High Schools.... View Obituary & Service Information

The family of Muriel W. Stewart created this Life Tributes page to make it easy to share your memories.

Send flowers to the Stewart family.