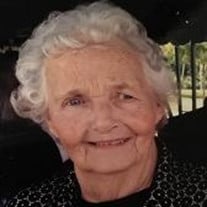 Patricia Kennedy Clarke, age 85 of Birmingham, AL passed away on May 29, 2018. She was a loving wife, mother, grandmother, great grandmother, sister and friend who always put others ahead of herself. Mrs. Clarke was retired from the Court System... View Obituary & Service Information

The family of Patricia Kennedy Clarke created this Life Tributes page to make it easy to share your memories.

Send flowers to the Clarke family.