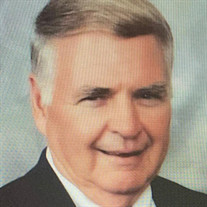 Ralph C. Fulton - beloved father, grandfather, brother, and friend, was welcomed into his heavenly home on Thursday, August 26, 2021. He was 79 years old and resided in Birmingham, AL. Ralph is survived by his loving wife of 25 years, Ann Fulton; his children - Ron Fulton (Stacy), Neely Franks (Paul), Michael Carter, Laney Beard (Alan); his grandchildren - Jeremiah Fulton, Charlie Fulton, Taylor Fulton, Garrett Franks, Harrison Franks, Parker Franks, Haley Motes (Shawn), Addie Grace Beard; his great grandchildren - Sadie Motes, Shawn Motes, Jr.; his sisters - Linda Craft (Rusty) and Kaye Cornwell, along with many nieces, nephews and cousins. He is preceeded in death by his parents - Ralph and Zelda Fulton; his son - Curt Fulton; and his brother - Ronnie Fulton. Ralph was born July 17, 1942. He graduated from the University of Alabama, with a degree in Chemical Engineering. He retired from the Jefferson County Health Department. He served our country as a member of the United States Air Force. A funeral service is scheduled to be held at Hunter Street Baptist Church on Tuesday, August 31. Visitation will be from 10am-11am, with a service following at 11am. Ralph had three main loves in his life - Jesus, his family, and Alabama football. He made sure to teach his children those same loves and in that order. Ralph was a member of Hunter Street Baptist Church, where he and his wife Ann served faithfully for many years. He was an avid lover of God’s word, and wanted everyone he knew to know the love of Jesus and the importance of His saving grace. He leaves behind a great legacy as a man who served God with his whole heart and made it his mission to share the Good News until the day he died. As Ralph would say, Jesus loves you, I love you, and Roll Tide

Ralph C. Fulton - beloved father, grandfather, brother, and friend, was welcomed into his heavenly home on Thursday, August 26, 2021. He was 79 years old and resided in Birmingham, AL. Ralph is survived by his loving wife of 25 years, Ann Fulton;... View Obituary & Service Information

The family of Ralph C. Fulton created this Life Tributes page to make it easy to share your memories.

Send flowers to the Fulton family.