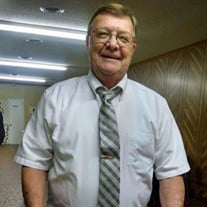 Richard Wayne Marler was born in Chilton County, Alabama to Ivan Nelson Marler and Ida Linnie Marler on November 4th 1949. After graduating from high school he married Karen Jackson, the love of his life. They had 3 sons; John, Jason, and Travis, and Wayne's 2 honorary sons Kaleb and Joshua. Shortly after high school Wayne enlisted to serve his country in the United States Air Force. While stationed at Bien Hoa Air Base in Vietnam he was promoted to Staff Sergeant and placed in charge of the Motor Pool, all at the age of 22. After his promotion he quickly made changes that directly resulted in massive production and reliability gains. Upon Honorable Discharge from the Air Force Wayne worked as a Mechanic and Millwright for the rest of his career. In addition to being a husband, father, grandfather, and great grandfather he served most of his life as a pastor. An avid outdoorsman he always got the deer and slayed fish in astronomical numbers. He was an outgoing man that never failed to make friends, though he did annoy them with bad jokes. He cracked himself up, though that was rarely the case with others. While we grieve with broken hearts at his passing, he will never be forgotten. All of his troubles and trials have ended, and he is in the presence of Jesus. To quote MLKJr, Free at last, free at last, Thank God he's free at last. We love you Daddy, see you soon.Wayne is survived by his children; John(Lisa) Marler of Jemison, Jason Marler of Calera, Travis(Kimberly) Marler of Jemison, Daniel Moore of Tennessee, and Stepdaughter Lisa Black of Kentucky. Brothers and Sisters; Kenneth(Geri) Marler of Huntsville, Cathy(Randy) Grill of Maylene, Elaine Marler of Clanton, Paula(Kenneth) Maudlin of Thorsby. He had 5 grandchildren and 2 great grandchildren.

Richard Wayne Marler was born in Chilton County, Alabama to Ivan Nelson Marler and Ida Linnie Marler on November 4th 1949. After graduating from high school he married Karen Jackson, the love of his life. They had 3 sons; John, Jason, and Travis,... View Obituary & Service Information

The family of Richard Wayne Marler created this Life Tributes page to make it easy to share your memories.

Send flowers to the Marler family.