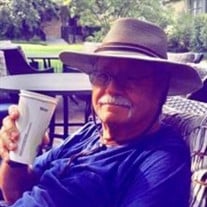 On March 1, 2021 we lost an amazing human being. Gene Woodall passed away unexpectedly and way too soon. He was 72 years old —-but had such an innocent loving way about him, he always seemed young. Everyone who knew Gene- knew what a kind and giving man he was. Gene was slow to anger (actually rarely showed any) but quick with a kind word, a laugh, a shoulder to lean on - he was just a good man. Gene grew up in Perry and Middleburg Florida. After high school he joined the Navy serving from 1969 to 1974. In 1977 Gene married Sharon, the love of his life. This would define Gene for the rest of his life. Their favorite song together was “since I met you baby —-my whole life has changed“ Their love story was indeed beautiful. Gene and Sharon eventually moved to McCalla Alabama - truth be told, Gene wanted to be close to his mama who had recently moved there. A sweet Mama’s boy to the end. When Gene married Sharon he became a dad to Sharon’s daughter Lisa- Who he cared for like his own - but it would be another 16 years before they were blessed with their first child together. Gene was 45 - Sharon 40 when Rachel Gabrielle was born. She was (and is) such a joy — The center of their world. Gene was a plumber by trade and a good one, working for the Guin company for decades - but also helping family and friends anytime they called. Some of those calls would come from members of the church Gene loved so much - Arnold’s Chapel United Methodist. Gene and Sharon loved the people there and they loved them. Gene also loved fishing and loved working around his house, in his yard — which he kept immaculate. But, he loved family the most. One of seven kids in a blended family— Gene was a devoted son and loving brother. There were no step or half brothers and sisters just brothers and sisters. Raised by loving parents - family gatherings were a way of life. After Sharon passed away unexpectedly at only 62, Gene’s focus became Rachel. Rachel, born deaf, depended on Gene for so much, and that was OK with him. The last few years of his life were spent with family and keeping Rachel happy. Gene’s siblings will now take care of Rachel. We certainly thought we’d have more time with Gene — we needed it — because he brought such a bright light into every single day. So today we grieve for this wonderful man, but, we also celebrate his wonderful life. While there is now a forever void without Gene, we know how blessed we were to have had him as long as we did. Gene is survived by his loving daughter Rachel, step daughter Lisa, Sisters Diane and Janice (Mark), Brothers Edward (Jana) David (Lesa) and Steve (Betty). Nieces Charlene, Misty and Ashley. Nephews Noah, Adam, Tristan, Ben, Richie, Tony, Keith, Robbie, Chris and Wade. Gene is preceded in death by his loving wife Sharon. His parents, Bob and Leila Rogers, and Dick Woodall - and brother Alvin Rogers. Pallbearers are: Adam Bryan, Noah Mcculloch, Ben Bramlett, Tony Rogers and Tristan Bryan.

On March 1, 2021 we lost an amazing human being. Gene Woodall passed away unexpectedly and way too soon. He was 72 years old &#8212;-but had such an innocent loving way about him, he always seemed young. Everyone who knew Gene- knew what a... View Obituary & Service Information

The family of Richard Eugene Woodall created this Life Tributes page to make it easy to share your memories.

Send flowers to the Woodall family.