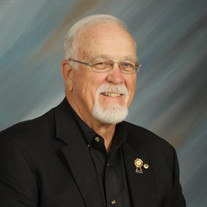 Rodney G. Clarke, loving husband, father, grandfather, brother, and uncle, received his heavenly reward on his 77th birthday on January 27, 2021. He was born in Mobile, Alabama on January 27, 1944. He graduated from Woodlawn High School (Birmingham, Alabama) and from Auburn University (Degree in Business Administration) where he met his wife, Judy Rackley, on a blind date. Rodney and Judy were married on February 27, 1965 and lived together in Auburn (AL), Columbia (SC), Oak Mountain (AL), Spanish Fort (AL), Oxford (AL), and Maylene (AL). Most of Rodney’s work experience was as Director of Engineering at Princeton Hospital (Birmingham), USA Women’s & Children’s Hospital (Mobile), and Regional Medical Center (Anniston). In 2004, he was vote “Healthcare Engineer of the Year” by the Alabama Society for Healthcare Engineering. Rodney was a “people person” who never met a stranger. He loved being involved in service organizations (Sertoma and Lions Clubs) for the benefit of others. His greatest focus, however, was to serve his local church and share the love of his Lord Jesus with others. Rodney was known for his great ability to connect with people on all levels, in hopes that they too would connect with the God he loved and served. He is preceded in death by his parents, Julius and Pauline Clarke, and his grandson, Connor William Davis. He is survived by his loving wife of more than 55 years, Judy Rackley Clarke. He is also survived by his son, Pastor Sean Clarke (Rhiannon) of Franklin, Tennessee; his daughters, Stephanie Davis and Stacie Saylor (Mike); and his sister, Brenda Riley (Michael); his eight grandchildren, Erika, Cole and Cross Davis; Kassidy, Kade and Kali Rose Clarke; McKenzie and Braydon Saylor; his niece, Kari Slappy (Tom); and his nephews Chris Farrow (Bobbie Sue), Dr. Rackley Ivey, Wynne Farrow, and Jason Riley (Kelly). The family will have a Celebration of Life Service on February 11th at 2:00 p.m. at Kingwood Church in Alabaster. Visitation will take place prior to the service at 1:00 p.m. In lieu of flowers, the family requests that donations be made to his son’s church: www.5stoneschurch.com 5 Stones Church, P. O. Box 442, Franklin, TN 37065.

The family of Rodney G. Clarke created this Life Tributes page to make it easy to share your memories.

Send flowers to the Clarke family.