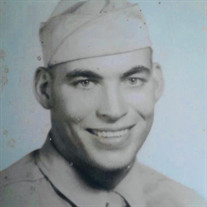 Roy "Bink" Parsons, 92, claimed his eternal reward on Sunday, June 2, 2019. He now joins his soulmate, Barbara Ann Parsons in preparing a home in heaven for their two daughters, Audra Elizabeth Parsons Humphryes (David) and Amanda Greer Parsons Bragan and grandchildren, Gabriela Angelina Bragan, John Camp Humphryes, and Riley Elizabeth Humphryes. He also leaves behind his best friend and ally, twin brother Troy "Chink" Parsons. Born in Dogwood Grove Alabama on March 24, 1927 to Robert Pinckney Parsons and Theodora Elizabeth Watkins Parsons. A member of the Greatest Generation, he was drafted in high school and served his country during World War II as soldier in the United States Army. He and his twin brother were chosen to be Military Police during the Nuremberg War Trials in Germany. He returned home to finish his education at Oak Grove High School. Some say it was to please his mother, but he secretly said it was only to play football. Bink excelled as an athlete, playing both football and baseball. He continued to play baseball into his fourth decade pitching for local minor league teams. It was once quoted that he could hit a baseball farther than the human eye could see. He chose to stay home and care for his sick mother as his peers married and started families. The year after his mother died, he met the love of his life and they spent the next 48 years in total adoration of one another. Bink and Barbara devoted their entire lives to their daughters attending every activity. The impact they had was best described by one childhood friend, “Both your mother and father were instrumental in serving as chaperones, parent figures, and role models where they helped raise numerous Hueytown High School students.” Bink retired from Jim Walters Resources after spending nearly 50 years as a coal miner where he was loved by all as “Papa Smurf” He was known for his blue eyes, quiet wit, and perpetually calm nature. The only thing that made him mad was when his Auburn Tigers team didn’t meet his standards! He had an easy personality with a variety of hobbies but being outside was his favorite. He learned to garden as a child at the heels of his father on the family farm. He planted a large garden every year, loved to coon hunt with his nephews and friends, hiking on his property with his wife and girls, he loved his animals and Big Band Music. Bink will be most remembered for his love for God. He read his Bible every day seeking God with faithfulness and intent. He was a longtime member of Woodstock United Methodist Church where he served on various committees. The love he had for his family cannot be quantified, he sacrificed himself at all times for his immediate and extended family, as displayed by the love his siblings, nieces, nephews, great nieces and great nephews had for him. He was preceded in death by his siblings: John Daniel(Inez), Robert Emmett(Ruby), Everett Vernot(Lucille), Susie Viola(Floyd), Floyd Sanford(Jennie), George Cecil, Etta Mae(Glenn), T.Z.(Barbara), and Elizabeth Inez(Edward). The family will receive friends Friday June 7, 2019 from 5PM until 7PM, with a memorial service starting at 7PM at McCalla Memorial Funeral Home. Interment will be held Sunday June 9, 2017 at 2PM at Dogwood Grove Baptist Church in Adger, Al. In lieu of flowers, donations can be made to Dogwood Grove Baptist Church. ~Blessed are the peacemakers, for they will be called children of God. ~ Matthew 5:9

The family of Roy Lester Parsons created this Life Tributes page to make it easy to share your memories.

Send flowers to the Parsons family.