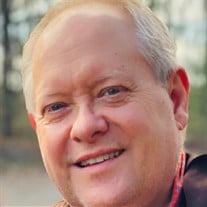 Dr. Shane K. Burchfield, DPM, 61, passed away in his home in McCalla, Alabama June 17, 2019 due to natural causes. He is survived by his wife of 22 years Evelyn Hopkins Burchfield, daughter Erin Little Mendez, son-in-law Dr. Derrick Mendez and grandson Ian Mendez. He was preceded in death by his father, Hugh Thomas Burchfield, and his mother, Eppie Hallman Burchfield, of Abernant, Alabama. Though born in Baltimore, Maryland during his dad’s military service, Shane spent his childhood in Abernant, where his dad and uncle operated a local grocery store. Shane enjoyed a happy childhood, spending many raucous days playing with his cousins who nicknamed him “Buckwheat”, enjoying small town life and being taught his “War Eagle” ways by his dad. Following graduation from Brookwood High School in 1976, Shane attended Auburn University where he earned a bachelor’s degree in Microbiology and Chemistry. Following graduation from Auburn, he worked as a pharmaceutical rep and later attended the Dr. William Scholl College of Podiatric Medicine in Chicago, earning a Doctor of Podiatric Medicine. Dr. B, as he was lovingly referred to by his many patients and friends, practiced podiatry at Family First Foot Care in Bessemer, Alabama. He was Board Certified in Podiatry, Podiatric Surgery, and Wound Care. He also served as an officer in the Alabama Podiatric Association. He worked with numerous homeless programs, served as a surgery tutor, and conducted podiatric research. His knowledge and experience in conservative podiatric care and in surgery assisted patients for over 25 years. A passionate Auburn Tiger to the core, Shane loved his university often traversing Highway 280 down to the Plains at every opportunity with his family and friends. Most importantly, Shane was strong in his faith, serving his Lord and Savior. He and Evelyn were members of Mountaintop Community Church. Funeral services will be on Sunday, June 23, 2019 at 2 PM at the McCalla Memorial Funeral Home, located at 4780 Letson Farms Parkway, McCalla, Alabama with burial following in the Memory Hill Gardens cemetery located at 2200 Skyland Blvd East, Tuscaloosa. The family will receive friends on Saturday, June 22, 2019 from 5 PM to 8 PM at the funeral home in McCalla. In lieu of flowers, the family suggests that memorial gifts be made to American Diabetes Association or the American Cancer Society.

The family of Shane K. Burchfield created this Life Tributes page to make it easy to share your memories.

Send flowers to the Burchfield family.