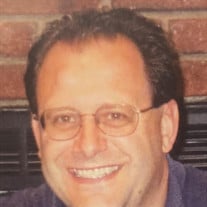 Ted William Shultz, 64, of Allison, Iowa passed away after battling a six month diagnosis on May 21st surrounded by his wife, stepchildren and grandchildren. Ted grew up in Iowa, attended Iowa State University and worked at CraneWorks/RentalWorks in Birmingham. He was a patriot, LOVED watching and attending Alabama football games, camping with his wife and dogs at Tannehill and fishing for crappie. Most would describe him with words like excellence, integrity, servant, big personality, a jokester. To know him was to love him. Although he had no children of his own, he was a wonderful stepfather to two stepdaughters and a stepson and you would not have known the difference. In his last days, he had a hope to live and wanted to fight because he had a host of family praying that he wouldn't leave them so soon, especially his wife, Rita of 30 years. Ted is survived by his wife, Rita Richey Shultz, his stepdaughters, Kimberly Eades Bowling (Jonathon) and Kacey Eades Thompson (Travis), and his only stepson, Cody Randal Eades (Shay), his grandchildren, Landon Kay Brooke Eades Smith (Baylen), Taryn Thompson Durham (Colby), Will Bradley Jones (Anna), Maggie Bowling Ivey (Tyler), Cody Ashly Eades, Joshua Grant Bowling, Trey Edward Lee Thompson, Brody Bryant Houston Eades, Seth William Thomspon (his namesake), Ryan Andrew Eades Bowling, Judson Cole Eades, Tanner Reid Thompson, Lindsey Kay Elise Eades, Tatum Wayne Eades Thompson, and Katie Brooke Lynn Thompson, and great-grandchildren, Boone Bradley Jones, Asher James Durham, Declan Patrick Jones and baby Smith on the way, his mother, Marilyn “Peg” Shultz of Allison, Iowa, his sister, Karen (Duane) Strempke, his brothers, Tom (Susie) Shultz and David (Sweetie) Shultz, his niece, Emily (Tyler) Kamish and their children, Connor and Quinn, his nephew, Mark (Shelah) Strempke and their daughter, Kinley, and by his nephew Bill Shultz. He is also survived by cousins, Doris Rindels, Ann (Ross) Grafft, Denise (Doug) Sivertson and Jay (Michele) Shultz, his brothers-in-law, Samuel (Karen) Richey and their children, Larry (Teresa) Richey and their children, and Jerry (Pat) Richey and their children. Ted was preceded in death by his father, Roger “Pete” Shultz, his paternal grandparents, Phillip and Leota Shultz, and his maternal grandparents, Hubert and Sena Ressler, aunts and uncles and a cousin, his father-in-law, Carl "Bud" Richey and his mother-in-law, Merium "Tiny" Richey. The funeral services will be held at McCalla Memorial Funeral Home on Tuesday, May 24th: family visitation at 8:30, visitation from 9:00 to 11:00, service at 11:00, procession to Jefferson Memorial Gardens South in Hoover following service and his family will be present to welcome loved ones. Pallbearers are the grandsons: Baylen, Will, Trey, Brody, Ryan, Judd, Reid and Tatum Honorary pallbearers serving in the US military: Ashly and Seth

Ted William Shultz, 64, of Allison, Iowa passed away after battling a six month diagnosis on May 21st surrounded by his wife, stepchildren and grandchildren. Ted grew up in Iowa, attended Iowa State University and worked at CraneWorks/RentalWorks... View Obituary & Service Information

The family of Ted William Shultz created this Life Tributes page to make it easy to share your memories.

Ted William Shultz, 64, of Allison, Iowa passed away after battling...

Send flowers to the Shultz family.