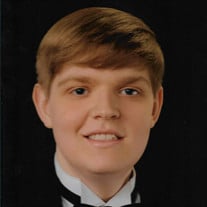 Our precious son, Trenton Brooks Amason, 22, of Green Pond, was called to be with the Lord November 21, 2021. Trent was born March 22, 1999 in Birmingham, the son of David and Lori Brooks Amason. He attended Woodstock Elementary and graduated from West Blocton High School in 2017. Trent was born with autism and faced all of the accompanying challenges along with the typical challenges of every day life. In spite of all, he was good natured and had a wonderful sense of humor. Trent enjoyed making us laugh and he loved to laugh. While he was not non-verbal, he was challenged to express himself. He found it to be much simpler to communicate using dialog he had memorized from movies. Even with all of the challenges, Trent taught us more than we taught him. We learned patience and perseverance as we made our way together. He was kind and wanted people to be kind to each other. Although he did not particularly like pets, he was very protective of them and did not want them to come to harm. Trent loved to watch movies. Some of his favorites were the Star Wars movies, Indiana Jones, the X-Men and an assortment of super heroes. He loved the Bible Man cartoons and live action series. He also loved the Veggie Tales series. He enjoyed quoting Scripture for us and when the occasion arose, he would gently reprimand with appropriate Scripture. Some of the other activities that Trent enjoyed were reading, visiting museums, visiting the zoo, and eating chips and cheese dip, shrimp tacos and Chinese food. Trent would come into the living room with a Star Wars book, a super hero book, or the Veggie Tale book the Fib from Outer Space. He would sit and read aloud to us. He was very good with voice impressions and he would change voices as the different characters spoke. Trent’s best friends were his older brother Trice (Bro) and his younger brother Trace (Little Brother). He enjoyed riding with them to a store to get a snack. Trent like to listen to music with them as they rode. He enjoyed talking about Star Wars and super heroes with them. If a question came up about a movie, he would always seek the opinion of his Bro. Trent is survived by his parents David and Lori; his brothers Trice and Trace. He also leaves his maternal grandmother Dorothy Brooks Thomason (James) and his paternal grandparents Bill and Lana Amason; many beloved aunts, uncles and cousins; and a beloved friend Jala Gamble. He was met in heaven by his maternal grandfather Rev. A. Franklyn Brooks Jr. (Pop Pop). A Trenton Amason memorial fund has been established at First Financial Bank. Donations will benefit the Special Education Resource Room at West Blocton High School. Or donations can be sent directly to West Blocton High School, 4734 Truman Aldridge Parkway, West Blocton, AL, 35184. (Include Lint on the memo line.) McCalla Memorial Funeral Home, 4780 Letson Farms Parkway, McCalla, AL, 35111, will handle funeral arrangements. Visitation will be held on Monday, November 29, 2021 from 5:00 – 7:00. The funeral service will be held at Grace Christian Church, 869 Hwy 52, Helena, AL, 35080, on Tuesday, November 30, 2021 at 1:00. Burial service to follow at Green Pond Presbyterian Cemetery.

Our precious son, Trenton Brooks Amason, 22, of Green Pond, was called to be with the Lord November 21, 2021. Trent was born March 22, 1999 in Birmingham, the son of David and Lori Brooks Amason. He attended Woodstock Elementary and graduated... View Obituary & Service Information

The family of Trenton Brooks Amason created this Life Tributes page to make it easy to share your memories.

Our precious son, Trenton Brooks Amason, 22, of Green Pond, was...

Send flowers to the Amason family.