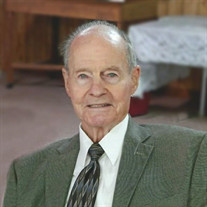 Walter Colquitt Johnston (Walt), age 95, of Bessemer Alabama departed this world bound for heaven on October 2, 2019. Born on Resurrection Sunday April 20, 1924, he was one of seven children born to Ramie Reeves Johnston and James Lloyd Johnston. Brothers Samuel Earl, James Harold, William Powell and Ray Edwin, sisters Mary Layatta Johnston Killough and Nellie Jane Johnston Fletcher all of whom have preceded him in death. When Walt was 5 years old his father died as a result of an industrial accident. Shortly thereafter he and his siblings went to live with his grandparents Mary Naramore Johnston and Larkin Johnston in Concord Alabama. Life on the farm was not easy but it built a strong work ethic and solid character that would serve him well his entire life. Walt attended Concord Elementary and Hueytown High School. He joined the US Navy in 1941 just weeks prior to Pearl Harbor. He served aboard the USS Roe, a Sims-class destroyer. He served aboard the USS Roe in both the Pacific and Atlantic theaters. During his years of service the Roe was awarded 7 bronze battle stars. On Aug. 14, 1945, V-J Day, the Roe was at port in San Francisco when celebration erupted. Walt returned to his ship to avoid getting "caught up in the craziness." The war was over. He served proudly and enjoyed seeing the world but was ready to go home. Upon his return to Alabama he went to work at U.S. Steel in Fairfield where he built a reputation for integrity and fairness. He retired after 36 years. In 1946, at the age of 22, Walt took the love of his life to North Georgia where they stood before a judge and vowed to love each other "til death do us part" ......and they meant it. Their love story spanned over 7 decades! Walt was a lifelong member of Seventh Street Baptist church and has documented much of the church`s history. Though he was a man of few words, his example spoke loudly. Walter is survived by his wife of 73 years Barbara Tramell Johnston, son Rodney Allen Johnston, daughter in law Lynn Lovett Johnston, daughter Pamela Johnston Perdue, son in law John Wesley Perdue, grandchildren Christopher Johnston and Anna Johnston, great grandson Andrew Johnston, Brothers in law Larry Tramell and Roger Tramell (whom he loved like a son) and his baby sister Ann Meeks Ensor. We believe Walter is rejoicing in the presence of our Lord and would likely say like Paul to Timothy, “do thy diligence to come shortly unto me.” (2 Timothy 4:9) A graveside service with military honors will be held at the Alabama National Cemetery in Montevallo, on Friday, October 4, 2019 at 11:00 AM. Alabama National Cemetery in Montevallo 3133 Highway 119, Montevallo, Alabama 35115 In lieu of flowers, memorials may be made to Big Oak Ranch P. O. Box 507 Springville, AL 35146

The family of Walter Colquitt Johnston created this Life Tributes page to make it easy to share your memories.

Send flowers to the Johnston family.