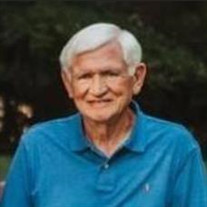 Wesley Wade, 85, of Bessemer, AL passed away on July 2, 2021 in the company of his loved ones. He was born south of Birmingham on August 28, 1935 into a farming family, which ingrained leadership skills and a strong work ethic in him. While at McAdory High School in McCalla, he served as senior class president, head of prom committee, captain of the football team, and was voted “best all-around” in his senior year. In school, he met his future bride, Lois Hulsey, the head cheerleader who began cheering for him on the field and continued to do so throughout their sixty-six years of marriage. During his senior year, he led McAdory to win their first state championship, which garnered offers for full-ride scholarships from every major university in the SEC. He chose his beloved University of Alabama. After playing one season for Alabama but wanting to be closer to home (specifically Lois!), Wes transferred to Howard College (now Samford University) where he played for famed coach Bobby Bowden. In 1955, he married Lois and started a family, producing three children: Suzy, Pat, and Janie. He began a career at Allied Chemical (now AlliedSignal) where, over his thirty-six years there, his work ethic and leadership advanced him from an entry level position to plant manager. Wes loved playing his part in his community by contributing to church and youth activities. For nearly twenty years, he was involved with the Boy Scouts of America, also coaching Pee Wee football for some time. During his time as Scoutmaster, he received the prestigious Silver Beaver Award, the highest honor possible in Scout leadership. Being a talented musician, he contributed his deep, soulful bass voice and song writing skills to the gospel quartet Uplifted for eighteen years. After leaving Uplifted, he continued a solo singing career at local churches and nursing homes where he was well-loved and always well-received. Most importantly to him, his love for his Lord and Savior, Jesus Christ, undergirded every part of his life and was obvious to all who knew him. He daily read his Bible and openly shared the gospel with whomever would listen, proving to be instrumental for many in their faith journeys. His loved ones do not yet fully fathom how much we will miss him. Still, we know that Wes would most want his death to prompt and help those who follow after him to love and trust Christ increasingly each day. His legacy is one of loving his family, his friends, his community, and his Savior, shining as one that we should all hope to emulate. “Precious in the sight of the Lord is the death of His saints.” – Psalm 116:15 He is preceded in death by his parents Roy Lee and Nancy Freeman Wade, as well as his brothers Melvin and Charles Wade. He is survived by his wife, Lois Hulsey Wade of Bessemer, AL; three children: Sue Ellen Spencer (Kenny) of Bessemer, AL, Patrick Wesley Wade (Joann) of Brentwood, CA, and Jane Elizabeth Jones (Terry) of Bessemer, AL; his sisters Nancy Leigh Woodall of Birmingham, AL, and Nell Clark of Bay Minette, AL; as well as six grandchildren Lindsey, Katie, Wesley, Sarah, Lauren, and Anna and a growing number of great-grandchildren. In lieu of flowers, the family respectfully requests that donations be made to Eastern Valley Baptist Church.

Wesley Wade, 85, of Bessemer, AL passed away on July 2, 2021 in the company of his loved ones. He was born south of Birmingham on August 28, 1935 into a farming family, which ingrained leadership skills and a strong work ethic in him. While... View Obituary & Service Information

The family of Wesley "Wes" Wade created this Life Tributes page to make it easy to share your memories.

Send flowers to the Wade family.