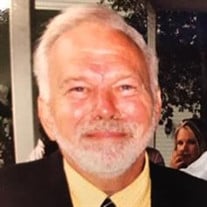 William Thomas “Crazy Bill” Cairns, 74 of Helena, Alabama was reunited with his family in Heaven on Thursday, October 25, 2018. Born on February 14, 1944 in Birmingham, Alabama as the first child of Thomas Jr. and Jeannette (Roberts) Cairns. He grew up in Sandusky and graduated from Minor High School Class of 1962. Having a birthday on Valentine’s Day, his frequent joke was to tell people to call him “Sweet William”. He lost half of his left ring finger in a Lawn Mower accident when he was about 14 years old. But the stories he made up about the loss of that finger were always different and always entertaining to the kids. Bill started building signs in the basement of his home in 1972 while also working two full time jobs. Before long, the sign business became full time and he was hiring family members to work with him. Today, Sign Builders, Inc. is one of the largest sign companies in the Southeast. In 1981, Bill was starting the business that would carry his name forever, “CRAZY BILL’S FIREWORKS”! Crazy Bill loved to go into the poor, rural areas and pass out free fireworks to the underprivileged. Bill’s businesses continued to grow. Sign Rentals, Signs Inc. of Columbus, Crazy Bill’s Fireworks, Fireworks of Alabama, C&F Enterprises, and many more. On September 27, 2003, Bill rededicated his life to the Lord. Not a better Christian man could ever be found. By early 2004 he started a weekly devotion at Sign Builders for all his employees. That devotion continues. He was a member of Grace Life Baptist Church. To most everyone, Bill was known for his never-ending generosity and kindness. He has refurnished homes for people who lost everything. He donated numerous toys for underprivileged children at Christmas. He paid for funerals of people he had never even met. He built the concession stand at the Park West Ball Park and at Minor High School. And those are just a few of the many things he has done for others. He never wanted to be recognized for his generosity here on this Earth. We’re sure that he is reaping his many rewards in Heaven. You wouldn’t see him driving a fancy car or wearing expensive clothing. He was just “one of the guys”. Always working in the sign shop. Bill’s medical problems started many years ago. Heart attacks, small strokes, thyroid cancer to name a few. He always bounced back and went right back to work. Sign Builders was his life. He loved his employees like family. Bill is survived by his wife of 14 years, Laura (England) Cairns; daughters Pam (Gary) Palmer, Patti Hoagland, Pennie (Jesse) Straiton, Debbie (Jeff) Neu and Brandy (Sean) Little; Step-Son, Chris Sirico; Sister, Jenny Cairns; Brother, Mark (Debbie) Cairns; Sister-in-Law, Beverly Cairns; Grandchildren, Lisa (Brandon) Easterwood, Tuesday (Chris) Shaw, Johnathon (Melissa) Click, Cameron (Nathan) Nichols, Christina (Chris) Neiman, Laura (Matt) Voss, Nathan (Tiffany) Foster, Luke Mosley, Braden Little, Briley Little, and Ethan Little; Great Grand Children, Nalani Lukela, Dylan Lukela, Madelyn Click, Jaxson Gray, Ethan Denham, Ezri Neiman, Jovie Neiman, Angelina Cochran, Charlie Click, Ava Kate Nichols, Nerys Neiman, William Click, Aria Foster, Madison Easterwood and Logan Easterwood; and his Aunt, Peggy Crauswell along with numerous other family members and lifelong friends. Preceding him in death were his parents, Thomas Jr. and Jeannette (Roberts) Cairns; Brother, Bob Cairns; Paternal Grandparents, Thomas Cairns and Isabella (Strachan) Cairns; and Maternal Grandparents, William Martin and Dora Ellen (Caudle) Roberts. Visitation will be Monday, October 29, 2018 at Grace Life Baptist Church, McCalla. Family Hour from 5 – 6 p.m. The Family will welcome visitors beginning at 6 p.m. The Funeral Service will be Tuesday, October 30, 2018 at Grace Life Baptist Church, McCalla. Service begins at 11 a.m. The burial will be a private family service. In lieu of flowers, the family ask that donations be made to Grace Life Baptist Church in memory of Bill Cairns.

William Thomas &#8220;Crazy Bill&#8221; Cairns, 74 of Helena, Alabama was reunited with his family in Heaven on Thursday, October 25, 2018. Born on February 14, 1944 in Birmingham, Alabama as the first child of Thomas Jr. and Jeannette (Roberts)... View Obituary & Service Information

The family of William Thomas Cairns created this Life Tributes page to make it easy to share your memories.

Send flowers to the Cairns family.