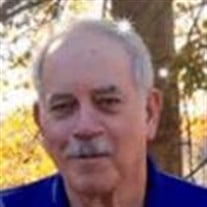 William Thurston Cooley, loving husband, father, grandfather and friend died peacefully at home on December 7, 2018, from pancreatic cancer. He is survived by his wife of 53 years, Mary Sebert Cooley, daughter Farrah Karadimos (Michael) and his precious granddaughter, Chloe. He was preceded in death by his parents Fairley and Katherine Smith Cooley and one sister, Virginia Cooley Roberts. Bill was born in 1942. He grew up in the Vineland Park neighborhood of Hueytown, Alabama. He was a member of Pleasant Ridge Baptist Church, a graduate of Hueytown High School, attended the University of Alabama, and served in the U. S. Army Reserves. He was a machinist at ACIPCO for 16 years and went on to work and retire from Jim Walter's Central Shop. Bill was what he called “a dog person”. He especially loved English Bulldogs and raised seven over the years, including his “best buddy” - Gypsy. One of his greatest joys in life was fishing. If he wasn't going fishing, he was talking about fishing. He also enjoyed playing golf, and was a HUGE Alabama Crimson Tide fan. The family wishes to thank those who prayed continuously for Bill during his illness, his caregivers Andrea and Keisha from Kindred Hospice, and his wonderful friends who were faithful to visit, call and encourage him (Butch, Larry, Bucky, Chubby, Bill, J.T., Mike). A visitation will be held on December 15, 2018 from 10 AM until service time at 11 AM. In lieu of flowers, please consider a charitable donation to the Birmingham Humane Society in his honor. Until we meet again, we love you. ROLL TIDE!

The family of William Thurston Cooley created this Life Tributes page to make it easy to share your memories.

Send flowers to the Cooley family.