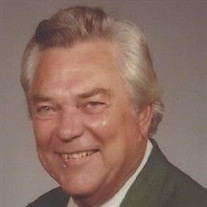 William Quitman Denson, Jr. resident of Vestavia Hills, Alabama passed away on July 13, 2019 at the age of 95. We give thanks to God for his life on this earth and for the eternal life which he now enjoys. And now these three remain: faith, hope & love, but the greatest of these is love. He was born on October 25, 1923 in Selma, Alabama. He enlisted in the U.S. Army in WWII, was wounded in the Battle of the Bulge and received the Purple Heart for his courage & valor. After an honorable discharge he attended the University of Alabama and received his B.A. in Art. He was a gifted artist using his skill both professionally and as an outstanding painter of portraits and many other beautiful works. He was also an accomplished golfer and a master woodcrafter, and founded Wee Scott Golf Company. For many years Mr. Denson worked in Shopping Center management and was the founding manager of Western Hills Mall until he retired in 1986. He was also a longtime member & Sunday School teacher in Vestavia Hills United Methodist Church which portrayed his faith in Christ that sustained his whole life. He is survived by his loving wife of 33 years, Ruby Landis Denson. Children: Debe Denson Henry, William Q. (Janice) Denson III, Dr. Christopher (Rita) Denson, Caroline (David) Lindskog, and step-son Jim Bliss Landis; Grandchildren: Davis (Cathy) Henry, Rev. Drew Henry, Denson (Lauren) Henry, Hope (George) Patterson, Brandon (Danielle) Denson, Timothy Denson, Lindsey (Drew) Holland, Jonathan (Brittany) Denson, Ryan Denson, Mason (Chelsea) Lindskog, Morgan Lindskog, Amberly (Greg) Youngblood, Ashley (Devin) Stringer, and Abbey (Austin) Ahern; and by his sister: Ann Lewis Brackin. He is also survived by 18 great grandchildren, a number of nieces and nephews, and by his beloved dog, Max. He was preceded in death by his loving wife of 39, years, Natalie Hodges Denson, his parents William Quitman Denson Sr. and Kathleen McKibbon Denson, sister: Amelia Denson Miller, & brother: Lloyd McKibbon Denson, & by son-in-law Ted Morrow Henry. The family is deeply grateful to the capable staff of Bill Nichols Veterans Home in Alexander City, AL for their loving care during the last chapter of his life. A Memorial Service will be held in the Chapel of Vestavia Hills United Methodist Church on Friday, July 19 at 12 PM with visitation beginning at 11 AM. In lieu of flowers the family requests that gifts be given to the Garden Ministry of Vestavia Hills UMC.

William Quitman Denson, Jr. resident of Vestavia Hills, Alabama passed away on July 13, 2019 at the age of 95. We give thanks to God for his life on this earth and for the eternal life which he now enjoys. And now these three remain: faith,... View Obituary & Service Information

The family of William Quitman Denson Jr. created this Life Tributes page to make it easy to share your memories.

Send flowers to the Denson family.