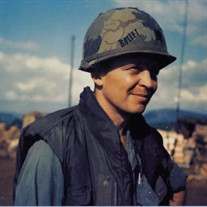 Bill was the eldest of three sons born to M. Lucile and Chester R. Haas. He grew up in Greenville, IL. He graduated from West Point Military Academy on June 7, 1955, and was commissioned as a 2nd Lieutenant of Infantry. On June 26, 1955, Bill married his high school sweetheart, Laura Mollet. Together they managed a full life that encompassed a 20-year Army career, 21 years of civilian employment, and 22 years of retired life. Their union produced three daughters. Bill’s Army career included several command assignments in the United States, Korea, Vietnam, and Germany as well as teaching at West Point. He retired from the Army as a Lt. Colonel in June 1975 as one of the most highly decorated combat veterans of his West Point Class. After retiring from the Army, Bill was employed as a teacher, retail manager, and construction project manager prior to settling in the field of office products, where he eventually formed his own company. His skills in financial management became known in the industry, and he lectured on the subject at national conventions. In 1996, Bill sold his company and commenced retired life. Retirement afforded Bill the opportunity to concentrate on a project about which he felt passionately since his youngest daughter’s birth (Bridget) in 1964—developing appropriate, effective, personalized care for the profoundly mentally handicapped. Bill was instrumental in securing improvements in institutional care. After the closure of institutions, Bill pioneered the Microboard option in Alabama, creating a fully functioning and highly successful Microboard home for Bridget. That accomplished, he commenced lobbying for Alabama’s recognition and promotion of the Microboard option. Bill is survived by his wife, Laura, and his daughters and their spouses: Jane Basler (Randy Basler), Cathy Willis (Mark Willis), and Bridget. He leaves behind six grandchildren: Chris Basler (Bonnie Basler), Meg Teske (Pete Teske), Alex Bimes, Steve Basler, Bill Harris, and Sam Harris. He is also survived by his great grandchildren: Max Basler, Bennett Teske, and Charlotte Teske. The family will receive friends from 10AM until 11AM on November 5, 2018 with services following at 11AM. Bill will be interned with full military honors at the Alabama National Cemetery in Montevallo, Alabama at 2pm on November 5, 2018. In lieu of flowers, memorials can be made in Bill’s name to United Ability of Birmingham (formerly United Cerebral Palsy) and mailed to: United Ability, 100 Oslo Circle, Birmingham, AL 35211.

Bill was the eldest of three sons born to M. Lucile and Chester R. Haas. He grew up in Greenville, IL. He graduated from West Point Military Academy on June 7, 1955, and was commissioned as a 2nd Lieutenant of Infantry. On June 26, 1955, Bill... View Obituary & Service Information

The family of William Haas created this Life Tributes page to make it easy to share your memories.

Bill was the eldest of three sons born to M. Lucile and Chester...

Send flowers to the Haas family.